“There are super high highs and super low lows, but I love it.
If you have one life to live, you might as well go
for your dreams. I like suffering through the pain because then
when you succeed you feel that you’ve worked for it.”

Britt Baron
Britt Baron is an actor known for her roles as Justine on Netflix’s GLOW (2017), Criminal Minds: Beyond Borders (2016) and Grey’s Anatomy (2005). Before acting on screen, Baron performed with the Steppenwolf Theatre Company in Chicago. 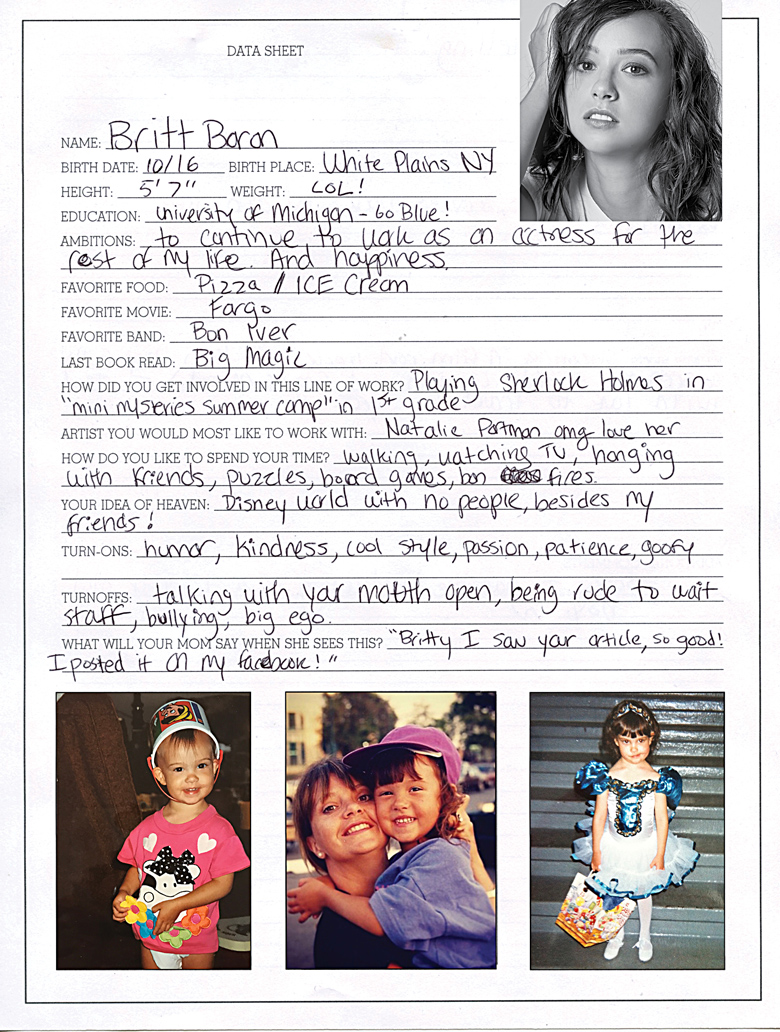 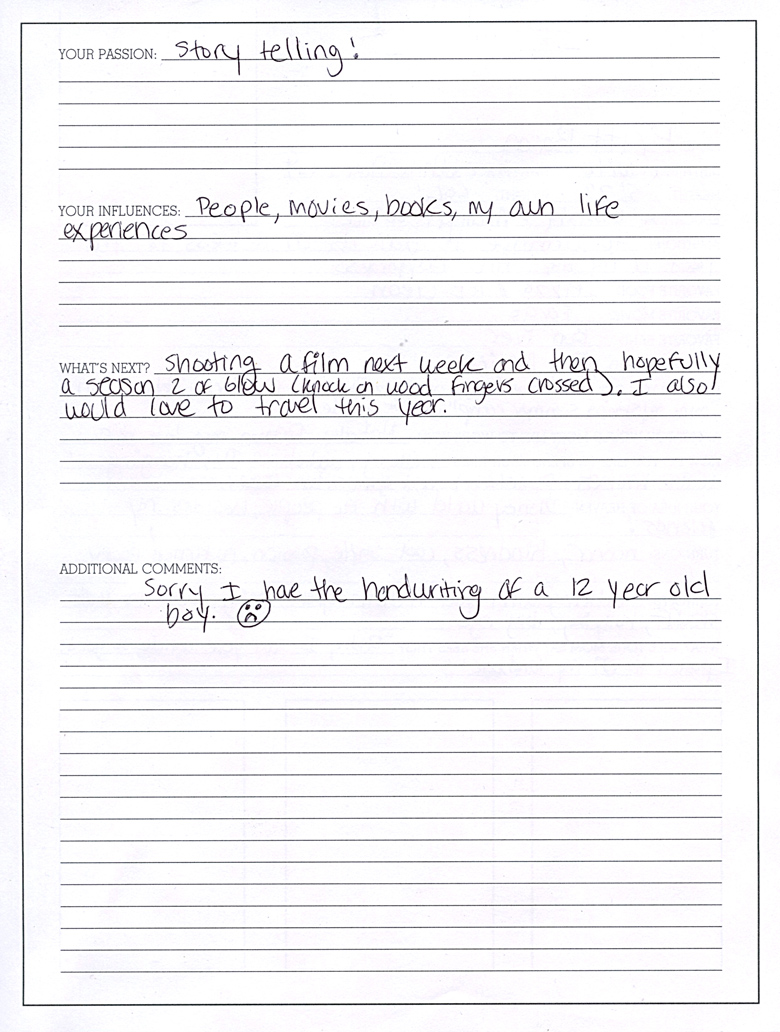 Where are you from?
Westport, Connecticut.

What are your ambitions?
To continue to work as an actress for the rest of my life. And happiness.

Your idea of heaven?
Disney World with no other people besides my friends!

What inspires you?
The world! People. I love when I am in cities where everyone is walking around. Observing other people and their behavior is really the best fuel for an actor. Books. Even just a poignant line from a book or song can be immensely inspiring. History, stories, my own life experiences, movies, documentaries, fellow artists, a good sunset.

How did you get involved in this line of work?
Playing Sherlock Holmes in a “Mini Mysteries” summer camp in 1st grade.

And what was your first break?
GLOW on Netflix.

What have you been in?
I played Gary Sinise’s daughter on Criminal Minds: Beyond Borders. I was on Awkward and Grey’s Anatomy. I’ve done some theater in Chicago at Steppenwolf. I’ve done a lot of voice-overs, like Halo and Skylanders.

How do you feel about this career?
It’s a roller coaster. There are super high highs and super low lows, but I love it. If you have one life to live, you might as well go for your dreams. I like suffering through the pain because then when you succeed you feel that you’ve worked for it.

How did you decide to become an actor?
I don’t know if there was ever a definitive time that I chose this. I started in community theater when I was really little, and I loved it. I went to a high school with a great theater program and my teacher there, Mr. Roth, pushed me to get a B.F.A. at University of Michigan. I think that’s when I decided, “Let me just try this now while I’m young, and if it doesn’t work out I can always go get a desk job or something.”

How did you get started?
During our graduation weekend we performed an accumulation of scenes from different genres and playwrights we had studied. I had taken a clown class my senior year and decided to perform an incredibly ridiculous improv scene as my clown character. When I say ridiculous, I mean I was wearing white velcro sneakers that were about six sizes too big, striped pajama shorts, a tucked in purple silk shirt with drawings of different purses all over it and a winter hat, just to give you the full picture. I didn’t know that an LA agent was in the audience that night, thank God, or I probably wouldn’t have chosen to perform as my clown. But after the show she began sending me out on self-taped auditions, and when I moved to Los Angeles she signed me officially. So I guess clowning helped me get my professional start!

How would you describe your specialty or your type?
A 16-20 year old who is angsty or has some sort of attitude. I get cast in a different way than I see myself, but I guess that’s how I would describe my type.

“Texting is hard. I feel like I’m always
misunderstood, or I misunderstand people.
Face-to-face is when you
can actually connect with someone.”
— Britt Baron

Who’s your favorite actor you look up to?
So many. Natalie Portman, Rooney Mara, Julianne Moore, Diane Keaton, Meryl Streep. I can go on and on, but those are some of my favorites.

What would your ideal job be?
Abigail in The Crucible. That’s one of my dream roles.

Do you consider yourself to be lucky?
Oh my gosh, yes! So lucky. Yes, yes, yes.

What advantages do you have?
I have a family that loves and supports me. I have amazing friends who are really supportive. I’m a white girl from Connecticut so that comes with advantages.

Would you rather have a car or diploma?
Are you kidding me? I would have never left [University of] Michigan if I didn’t have to. Those were the best years of my life. Diploma. One hundred percent. I don’t even like driving. That’s the worst part of living in LA.

How do you feel about how interconnected the world has become?
I think it’s great. It has allowed me to have opportunities that I probably wouldn’t have had prior to it. At the same time, I think it’s also incredibly scary.

“I love when I am in cities where everyone
is walking around. Observing other
people and their behavior is really the best
fuel for an actor.”
— Britt Baron

What does the future look like to you?
Unknown. I think it’s a little scary right now, but hopefully good!

How do you feel about having children?
I want children. I definitely want kids— I love kids —just not right now. In the future.

What challenges do you feel the world is facing today?
Global warming. If our planet doesn’t exist or if it’s not livable then nothing else is going to matter. All of the cultural clashes and wars over religion and racism, none of that will matter if our planet doesn’t survive. So I think the environment is our biggest issue right now.

What are you most grateful for?
I have a really awesome family that supports me. They’re the whole reason I even have the courage to come out here and try to act. I love them and would do anything for them.

What’s your favorite way to communicate?
Face-to-face, obviously. Because texting is hard. I feel like I’m always misunderstood, or I misunderstand people. Face-to-face is when you can actually connect with someone.

What’s your favorite book, film, and music right now?
I just finished Big Magic by Elizabeth Gilbert. It’s great for artists. But my favorite of all time? Anything by J.D. Salinger – Nine Stories. I loved Bon Iver’s new album. He should have won best album this year. Sorry Adele or Beyoncé, whatever that feud was. It was just so good. The Handmaid’s Tale is so amazing, and I just saw Okja. I loved that too. These aren’t my favorites of all time. These are my more recent things.