To me they feel thrilling and deep.”

Madelyn Deutch
Madelyn Deutch is an actor, writer and musician from Los Angeles. She is known for her roles in films such as 50 to 1 (2014) and Windsor (2018) as well as recurring characters in TV series Texas Rising (2015) and Outcast (2016-). Deutch wrote and stars in The Year of Spectacular (2018) and appears in forthcoming action flick, Bad Company. Deutch is also one-half of electronic pop duo BLEITCH.

50 to 1
Based on the true story of racehorse Mine That Bird, 50 to 1 (2014) is a drama film directed by Jim Wilson and starring Skeet Ulrich, Christian Kane and William Devane. It tells the story of the undersized thoroughbred who won the 2009 Kentucky Derby in what became one of the biggest upsets in racing history.

Outcast
Based on the comics by Robert Kirman and Paul Azaceta, Outcast (2016-) is an American horror TV series with themes of demonic activity. Patrick Fugit plays Kyle Barnes, a man rejected by his town in West Virginia for allegedly harming his family.

Actor, writer and musician Madelyn Deutch grew up in the San Fernando Valley. Acting is in her blood, as she puts it, and certainly Deutch has had a steady stream of roles dating back to 2011’s heartwarming film Mayor Cupcake which she appeared in alongside her mother, actor and director Lea Thompson. Films since then have included indie favorites 50 to 1 (2014) and this year’s Windsor, about a young woman’s decision to stay on her family’s farm while her friends look forward to ditching their small town. Deutch’s latest role is also her screenwriting debut. Directed by and co-starring Thompson, The Year of Spectacular Men stars Deutch as post-grad floundering in relationships while growing closer to her mother (Thompson) and sister (played by real-life sister Zooey Deutch). Deutch also composed the score for The Year of Spectacular Men along with her musical partner, musician Piers Baron, with whom she forms electronic duo BLEITCH. Deutch discusses this new chapter of her film career and the types of stories she hopes to continue telling. 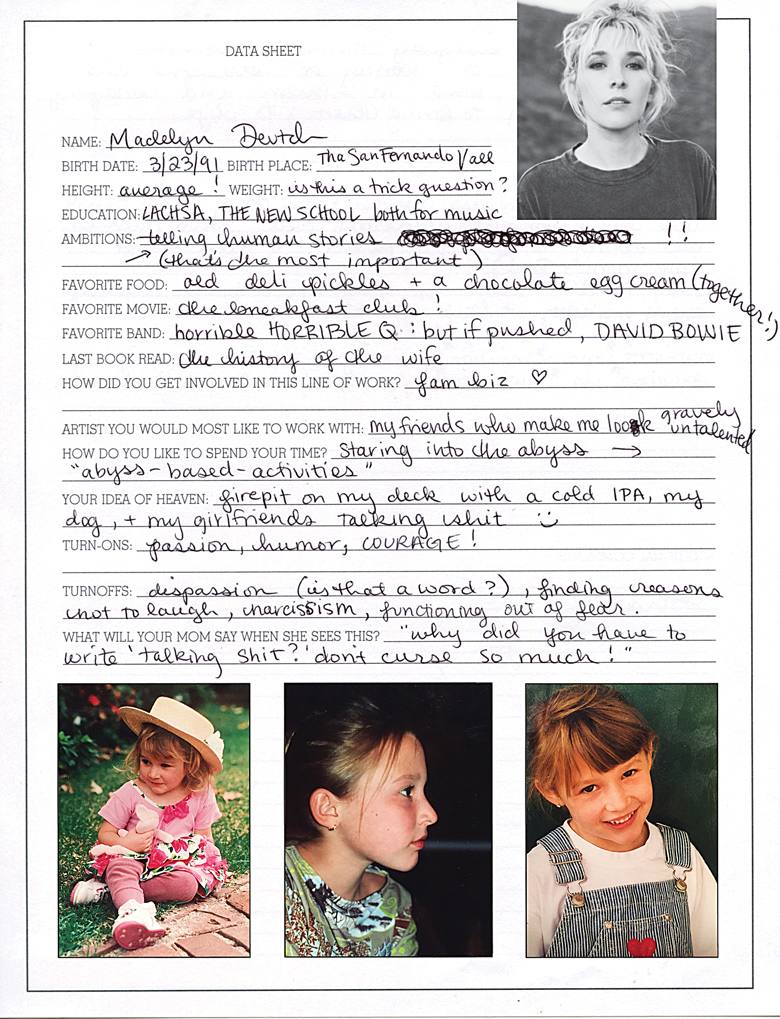 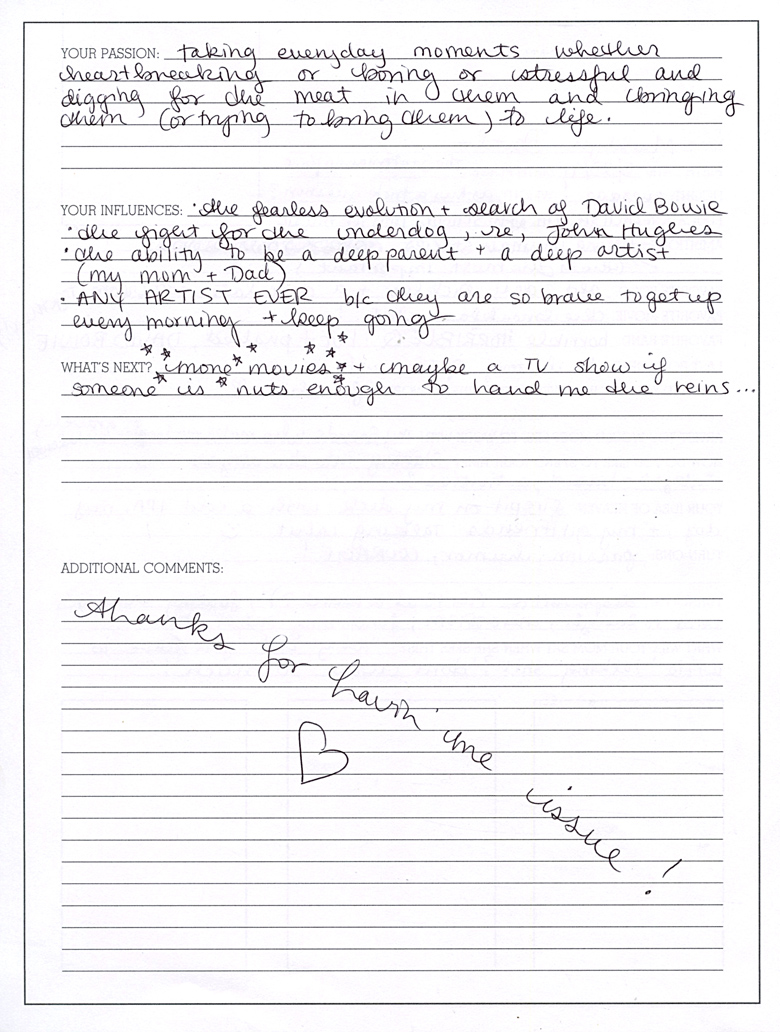 Where are you from?
Deep in the San Fernando Valley.

What was your first break?
The film I’m releasing right now. I’m hoping it will be a stepping stone to more opportunities.

What have you been in?
I was in a great indie movie about a racehorse, called 50 to 1. I was on a TV show called Outcast. I’ve done a bunch of other tiny little movies where I ran around in small towns, and then I have my film that I wrote and starred in called The Year of Spectacular Men.

How do you feel about this career?
Good. I’m three generations deep in people working in the entertainment business, on both sides of my family. So did I have a choice? We’re not sure.

So how did you decide to become an actor?
I literally grew up in it. I guess it’s just in my blood.

“I have the ability dig into and see the layers in things that most people would feel like are pedestrian. To me they feel thrilling and deep.”
— Madelyn Deutch

How would you describe your specialty to your type?
One of the best compliments I ever got was from a good friend of mine, who said I have the ability to see the magic in a lot of things that most people don’t. As an artist or screenwriter, I have the ability dig into and see the layers in things that most people would feel like are pedestrian. To me they feel thrilling and deep.

Who is your favorite actor you look up to?
Specifically because she’s able to make literally anything work, Emma Stone.

What would your ideal job be?
Telling compelling stories about people whose stories aren’t normally told, like young women or people of color. Also, working with artists who have a lot to give, who roll up their sleeves, have something to say, and are really excited to be there.

What advantages do you have?
I know people that have been through it so many times, and I can ask for their thoughts and advice. Most people are like “Mom, don’t tell me what to do. You don’t even know.” And I can’t do that.

Would you rather have a car or a diploma?
A car. College is the worst lie my generation has been sold. Maybe it’s because I have a degree that I don’t care about it—I sound really cavalier. But all the people I know who are doing extraordinary things are pissed off teachers or something. I’m starting to think there’s a correlation.

What do you think about the need for instant gratification?
That’s one of my worst habits. I’m an Aries—Scaries, I like to call it—and I actually have zero patience. I’m trying to do better.

How do you feel about how interconnected the world is becoming?
It’s that line from Spiderman: “With great power comes great responsibility.” We’re so globalized now that we have the ability to use our powers for good instead of evil. I think it comes down to the individual and what the individual wants to accomplish in this life.

What does the future look like to you?
Hopefully Trump is impeached.

How do you feel about having children?
I always said I didn’t want them, and then I dated someone who permanently didn’t want children. All of a sudden, I was like, “Wait, maybe I want the opposite.” So I actually have no idea.

“All the other problems we’re facing are a moot point if we enter into another ice age. We have to deal with the planet.”
— Madelyn Deutch

What challenges do you feel the world is facing today?
None of it matters if the world explodes, which it will if people deny climate change. All the other problems we’re facing are a moot point if we enter into another ice age. We have to deal with the planet.

What are you most grateful for?
The luxury of being able to stop and look at something beautiful and to really acknowledge it, not shove it off.

What is your favorite way to communicate?
I live on a farm with no service, so I call my friends on Facetime audio. They pick up the phone as if they’re being wiretapped. They’re like, “Why you’re calling me on Facetime audio? What’s going on?”

What’s your favorite book, film and music right now?
I’m reading a collection of essays called White Girls by Hilton Als. Music, I have to go with Damn by Kendrick Lamar because he’s the most profound person ever. I am just gonna say Wonder Woman for movie because it’s more than just, “Oh, they made a superhero movie with a female superhero.” It says a lot about commerce and the systemic underpinnings of being a girl in our business.