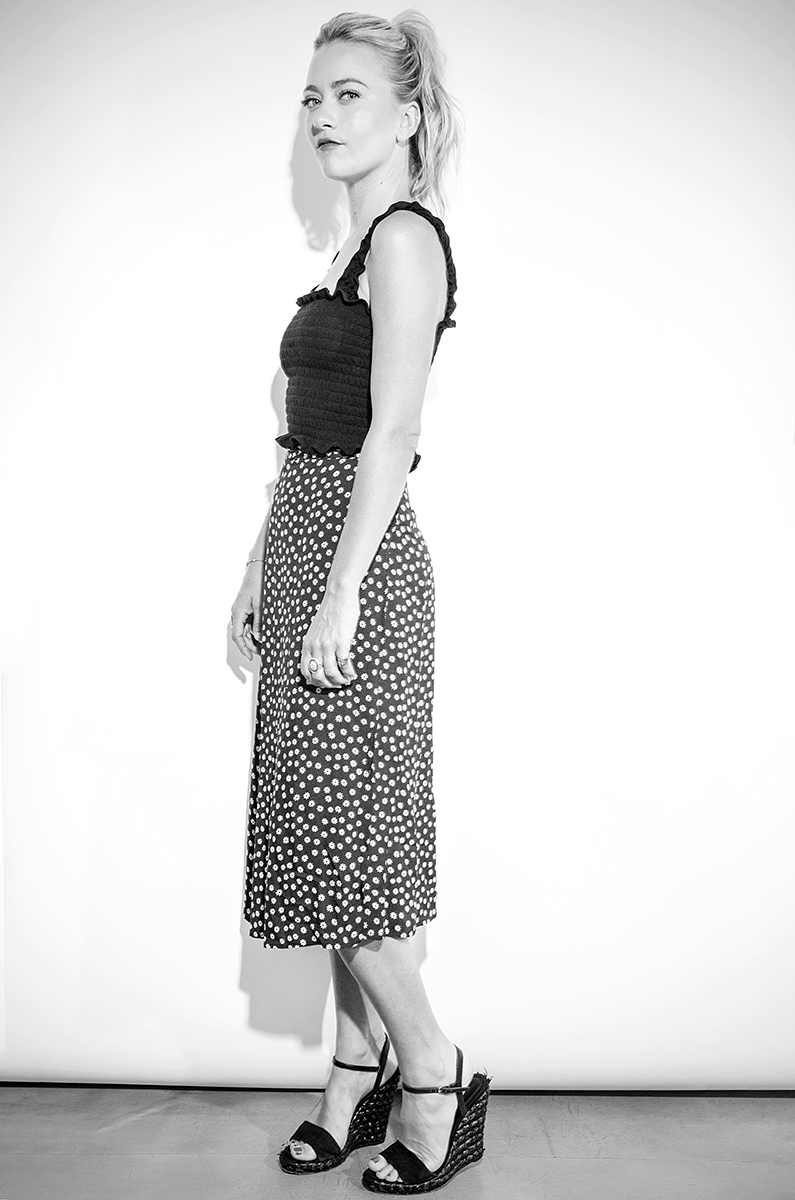 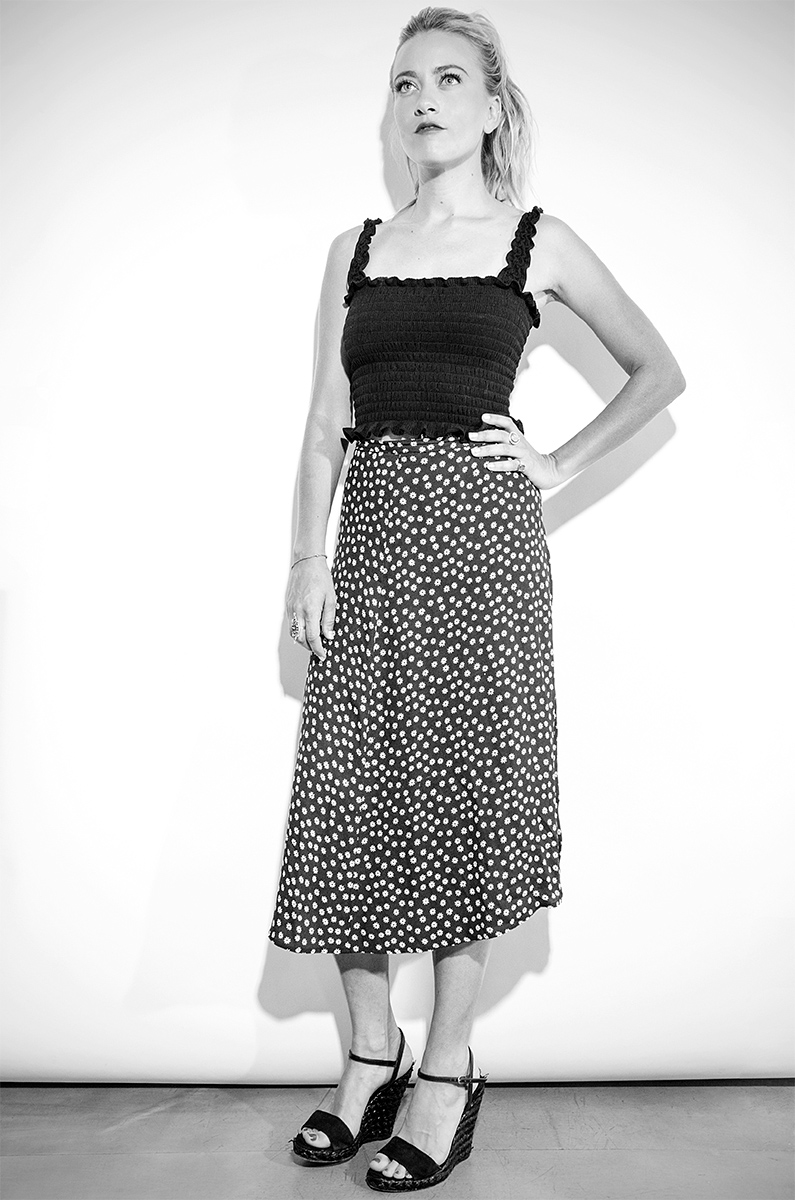 “I try to break perception.
On the surface, I am a silly comedic blonde,
but I try to play against that when I can.”
— Meredith Hagner

Meredith Hagner
Meredith Hagner is an actress from North Carolina known for her roles in HBO series Veep (2012-), TBS’s Search Party (2016-) and Younger (2015-). She moved to New York after attending the Boston Conservatory for one year, making her small screen debut in the soap opera As the World Turns in 2008.

Strangers
Strangers (2017-) is an American comedy-drama web television series created by Mia Lidofsky and starring Zoë Chao and Meredith Hagner. The series debuted at the Sundance Film Festival in January 2017 and was later acquired by Facebook Watch as its first scripted series.

Meredith Hagner landed her first television role as Liberty Ciccone on the soap opera As the World Turns. She plays Cam in Facebook Watch series Strangers (2017-), a queer comedy navigating sexuality, friendship, and struggling careers in Los Angeles. Hagner also stars in TBS’s satirical murder mystery series Search Party (2016-), praised highly by TV critics at The New Yorker and Vulture. Hagner speaks about her first paid gig, not hanging onto memories of hardship, and the kinds of stories she’s excited about. 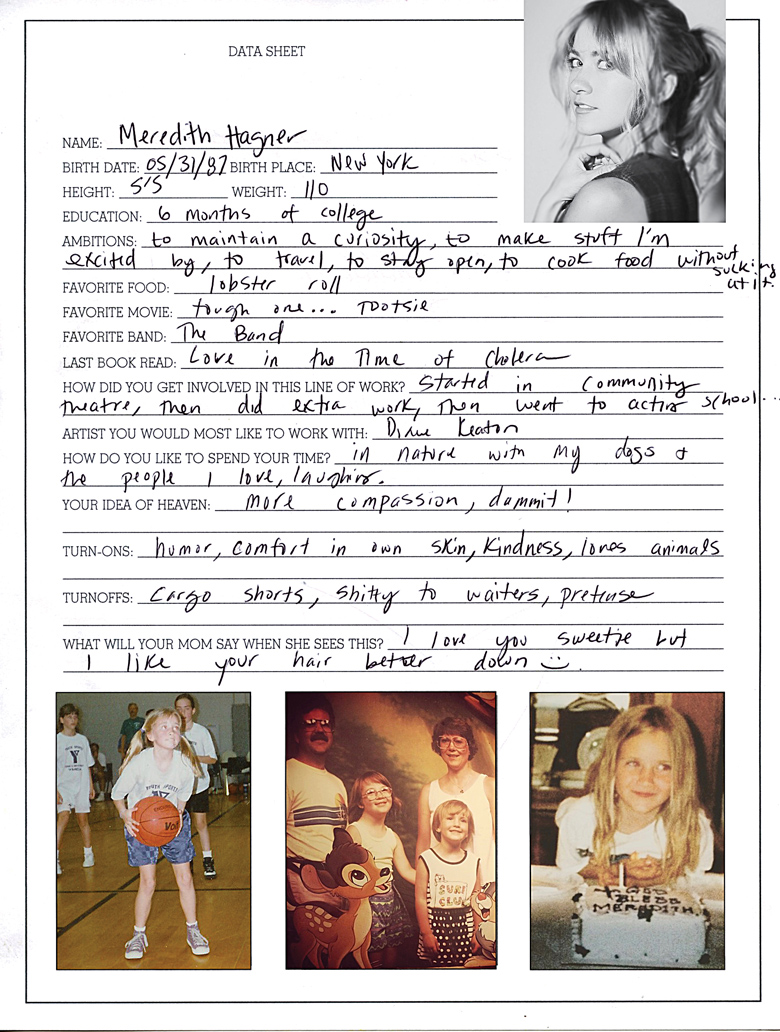 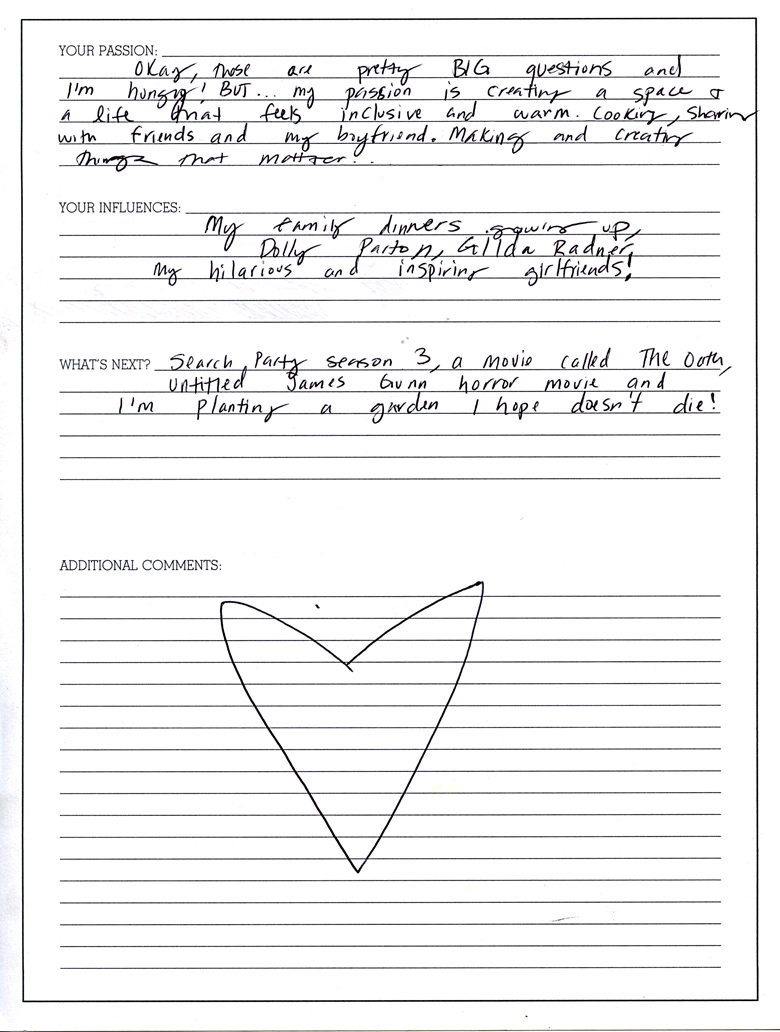 Where are you from?
Houston, Texas and Chapel Hill, North Carolina.

Ambitions:
To maintain a curiosity, to make stuff I’m excited by, to travel, to stay open, to cook food without sucking at it.

Artist you would most like to work with:
Diane Keaton.

Your idea of heaven:
More compassion!

What will your mom say when she sees this?
“I love you sweetie, but I like your hair better down.”

What have you been in?
I do a show called Search Party on TBS. I did a movie called Hits that played at Sundance. I do Strangers which is on Facebook Watch.

How did you decide to become an actor?
I came out of the womb trying to perform, and I always really wanted to do it. I did community theater.

How do you feel about this career?
I love it. It has its highs and lows, and it’s really good work when you can get it.

“My ideal job would be continuing to do something that’s challenging, working with a team of people who do what they do at a high level, and telling a story that I’m excited about.”— Meredith Hagner

How would you describe your specialty or type?
I try to break perception. On the surface, I am a silly comedic blonde, but I try to play against that when I can.

Who is your favorite actor you look up to?
I love Diane Keaton so much. I love Meryl Streep. I could continue, but I’ll leave it at those two for right now.

What would your ideal job be?
My ideal job would be continuing to do something that’s challenging, working with a team of people who do what they do at a high level, and telling a story that I’m excited about. I’m picking the tree still.

What advantages do you have?
I have a really easy time forgetting any hardship that’s happened. I don’t know if it’s because I have a bad memory, but I bounce back pretty fast.

“I have a really easy time forgetting any hardship that’s happened. I don’t know if it’s because I have a bad memory, but I bounce back pretty fast.”— Meredith Hagner

How do you feel about how interconnected the world is becoming?
I find it wonderful and scary and all those things wrapped up at the same time.

What does the future look like to you?
The future looks to me like a series of really happy days. That’s so cheesy, but that’s what I feel.

Blake Mills
Blake Mills is a songwriter and producer from Malibu, California. He has produced and collaborated with artists including Conor Oberst, Weezer, Lana Del Rey, and Fiona Apple. Mills has released released two albums: Heigh Ho (2014) and Break Mirrors (2010).

The Dovekeepers
Written by Alice Hoffman, The Dovekeepers (2011) is a historical novel set in ancient Israel that chronicles the Siege of Masada near the end of the first Jewish-Roman war. A two-part television adaptation of the same name aired on CBS in 2015.

What challenges do you feel the world is facing today?
It’s empathy and humanity—summed up in two words and that’s a way bigger conversation.

What are you most grateful for?
I’m really grateful for the opportunities I’ve been given and the luck of having been born in the place that I was born, with the advantages that I have. I’m very lucky.

What is your favorite way to communicate?
Face to face, possibly on a dance floor.