“It wasn’t about putting on a massive performance.
It was just being a real person.”
— Thomasin McKenzie

Thomasin McKenzie
Thomasin McKenzie is an actor from New Zealand, best known for her role in popular soap opera, Shortland Street. McKenzie has appeared in a number of films including The Hobbit: The Battle of the Five Armies (2014), Bright Summer Night (2016), Lucy Lewis Can’t Lose (2017), and she stars in this year’s film Leave No Trace.

Existence
Existence (2012) is a New Zealand film directed by Juliet Bergh about a woman living on a post-apocalyptic earth who is cut off by a mysterious boundary from reaching a new world on the other side. The film stars Loren Taylor, with a supporting cast including Peter McCauley and Matt Sunderland.

Lucy Lewis Can’t Lose
Lucy Lewis Can’t Lose (2016-17) is a New Zealand children’s comedy series released on YouTube and ThreeNow. Starring Thomasin McKenzie, Lucy Lewis is about a shy high schooler who involuntary becomes her class representative and leads a series of campaigns to make her school a better place.

Jane Campion
Jane Campion is an Academy Award-winning New Zealand screenwriter, producer, and director. She is the only female filmmaker in history to receive the Palme d’Or prize at the Cannes Film Festival for her film The Piano (1993).

Leave No Trace
Starring Thomasin McKenzie and Ben Foster, Leave No Trace (2018) is an American drama film directed by Debra Granik. Based on Peter Rock’s novel My Abandonment, the film follows a 13-year-old and her father whose isolated existence on public land is disrupted by state authorities.

At 17 years old, New Zealander Thomasin McKenzie has been acting since before she can remember. Raised in a family of actors and filmmakers, her experience includes voice overs, web series, and feature films. McKenzie’s most recently co-stars in Leave No Trace, her first American film by formidable director Debra Granik (Winter’s Bone). Based on Peter Rock’s novel My Abandonment, Leave No Trace portrays a daughter and father living quietly in one of Portland’s public parks until a small mistake brings them under the pressure of state authorities. McKenzie discusses being drawn to her character, “Tom,” and why she’s had a change of heart towards acting as a career. 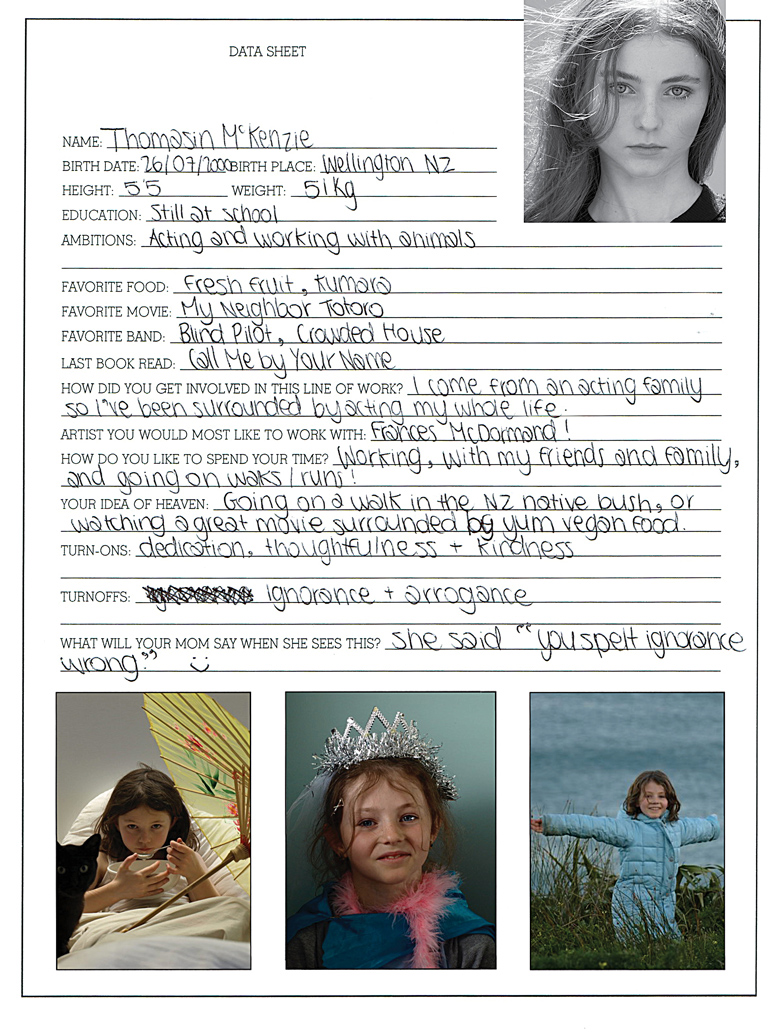 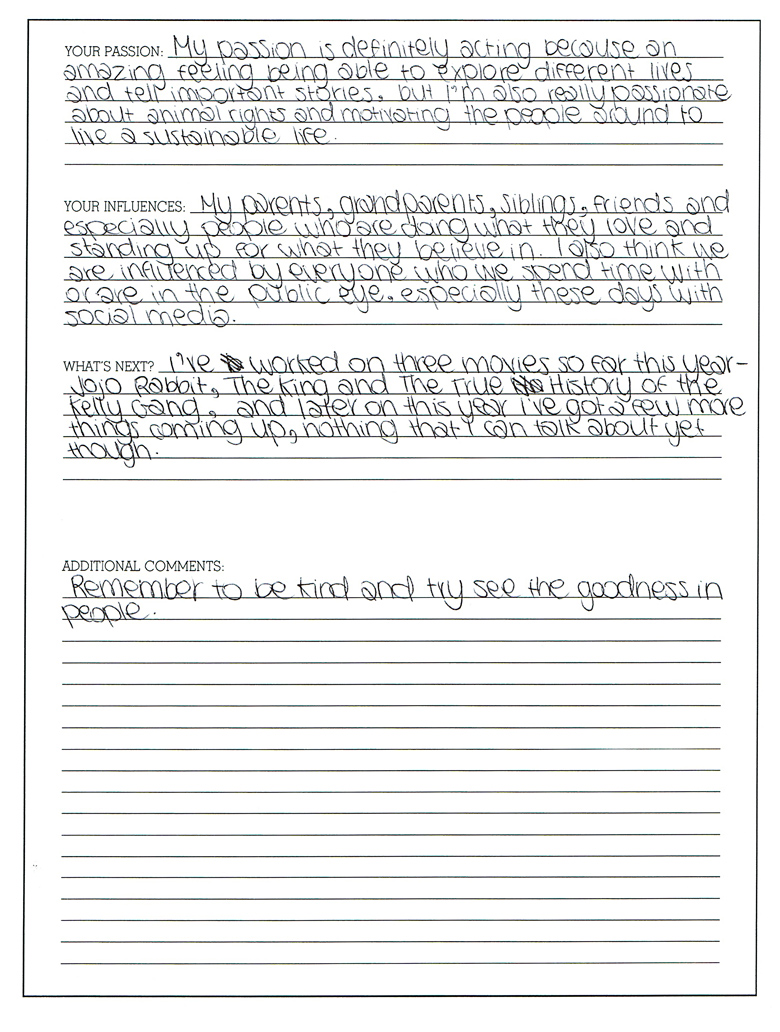 Where are you from?
Wellington, New Zealand.

Ambitions:
Acting and working with animals.

Your idea of heaven:
Going on a walk in the New Zealand native bush, or watching a great movie surrounded by yummy vegan food.

Artist you would most like to work with:
Frances McDormand

What was your first break?
My first role was in a feature film for the New Zealand Film Festival called Existence. I think I was seven. That’s the first I can remember, but I did some voiceovers and small acting roles before then.

What have you been in?
I was in a film called Consent about a lady named Louise Nicholas, a true story. I was in a New Zealand soap opera called Shortland Street. I played a young girl called “Pixie” who had cancer, which was pretty intense.

I’ve done a couple web series. The first was based off A Midsummer Night’s Dream by Shakespeare, called Bright Summer Night. I played the female version of Peter Quince. Then I did a kids web series called Lucy Lewis Can’t Lose where I played Lucy.

I did a short film called The Boyfriend Game, directed by Alice Englert who is Jane Campion’s daughter. I got to work with her and Jane. That was the first thing I did overseas, in Australia. Then I did my first American film, Leave No Trace.

How do you feel about this career?
Acting is what I love to do, and it’s when I feel my happiest. I’m really excited about the opportunities it gives me.

“It made me realize that acting gives me an opportunity to tell stories that need to be heard, and it means I can make a difference.”
— Thomasin McKenzie

But at first, I did not want to do it at all. I was dead set against it as the last thing I wanted to do because I’d been surrounded by it my whole life. But then when I did Consent, it made me realize that acting gives me an opportunity to tell stories that need to be heard, and it means I can make a difference. That’s how I kind of got into it.

“I look up to anyone who’s doing what they want to do. They’ve got a good work ethic, and they are doing their part to make the world a better place.”
— Thomasin McKenzie

I look up to anyone who’s doing what they want to do. They’ve got a good work ethic, and they are doing their part to make the world a better place.

What would your ideal job be?
I’d love to do something that involves animals, like working at an animal sanctuary.

What would your ideal acting role be?
I really want to play an elf, vampire, witch, or some kind of mythical creature.

Do you consider yourself to be lucky?
Very lucky in what I’ve done in my life so far. The family I’ve been born into, the community I live in, the opportunities, the friends. I have endless amounts of luck.

How did your role in Leave No Trace come about?
I got sent the audition by my American agent and manager. I did a self-tape and sent it off to the casting director. Then I got a recall, and I Skyped with Debra Granik, the film director. I did the audition scenes again and some improv. We Skyped again six months later, and I got the part.

“It wasn’t about putting on a massive performance. It was just being a real person.”
— Thomasin McKenzie

What about this part interests you the most?
What attracted me the most is that it’s a really gentle and quiet film. It’s just two people living their lives and being. It wasn’t about putting on a massive performance. It was just being a real person. I also loved the opportunity to show a really beautiful relationship between a dad and a daughter.

In what ways do you identify with your character in the film?
That she’s quiet. I tend to be a pretty quiet person. I’m more of a thinker. She’s observant, and she really values learning, which I love about her. She’s also connected to nature, which is pretty cool.

What was the most challenging part of the role?
It’s the ending, which if I said it, it would give the whole story away. I love my dad, and I have an amazing relationship with him. He’s done a lot in my life. I won’t say what the ending is, but it was a challenge for me.

What do you think about the need for instant gratification?
It’s okay to want to have interesting things in your life. Happiness is an important thing. But there’s also something to be said for working really hard at something and the gratification that comes from that.

How do you feel about how interconnected the world is becoming?
I’m just thinking about my sister right now because she’s on the internet way too much. I think the Internet is an amazing thing that gives people the opportunity to obtain so much more knowledge and to see things around the world. I also think you need to use it wisely and not too much.

What does the future look like to you?
Hopefully a happier, more positive, and more aware place where people aren’t so ignorant to what’s going on.

What challenges do you feel the world is facing today?
Quite a few, in terms of the environment and political leaders. I think one of the biggest challenges is acceptance of other people, cultures, religions, and just other people’s beliefs.

What are you most grateful for?
My family because I wouldn’t be where I am without them.

What is your favorite way to communicate?
Speaking directly to people.