“I get kidnapped a lot, and I die a lot.
Maybe that’s my specialty or type. I look kidnap-able.
Is that a good thing? I don’t think so.”

UnREAL
UnREAL (2015-) is an American drama television series on Lifetime, starring Shiri Appleby as a young reality television producer pressured to forego integrity and do whatever it takes to come up with licentious content. The show is Lifetime’s most critically acclaimed scripted series ever with a supporting cast including Constance Zimmer, Josh Kelly and Genevieve Buechner.

Since her breakout role in Canadian indie flick Saint Monica (2002) at age nine, Genevieve Buechner has appeared in nearly 50 TV series and films, including last year’s horror flick The Hollow Child. She is best recognized for her role as Madison, a meek production assistant in Lifetime’s hit show UnREAL, due to release its third season in the new year. Buechner credits her success to luck and a lot of hard work, while anticipating her ever-expanding future in film. 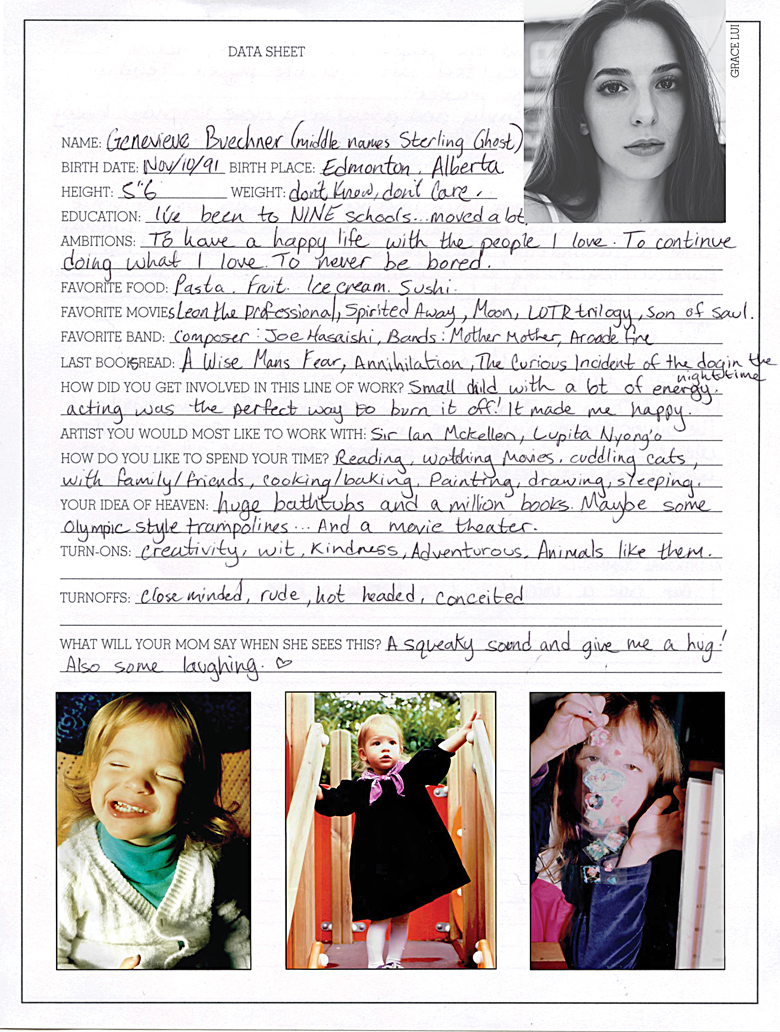 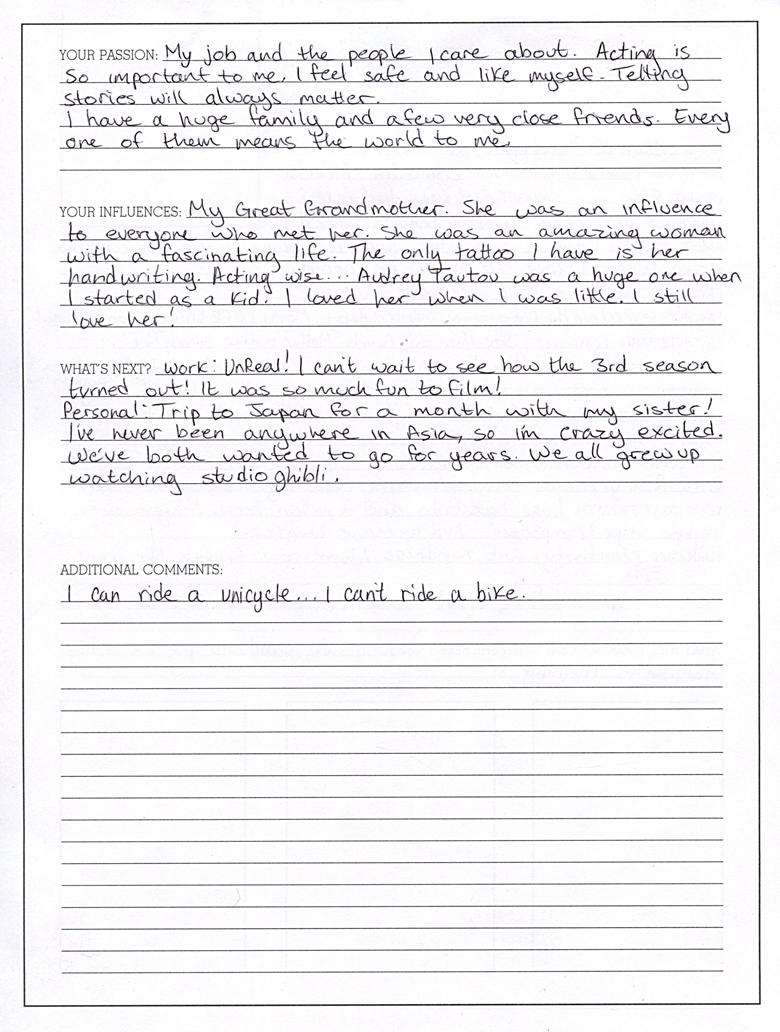 Birthplace:
I’m from Vancouver, but I was born in Edmonton, Alberta.

Education:
I’ve been to nine schools. We moved a lot.

Ambitions:
To have a happy life with the people I love. To continue doing what I love. To never be bored.

Artist you would most like to work with:
Sir Ian McKellan and Lupita Nyong’o.

Your influences:
My great-grandmother. She was an amazing woman with a fascinating life. The only tattoo I have is her handwriting. Acting-wise, Audrey Tautou was a huge one when I started as a kid. I loved her when I was little, and I still love her!

What was your first break?
Probably the first movie I ever did, a little indie in Canada called Saint Monica. I was nine, and I was the lead. That movie went all over the world. I’d never been outside of Canada before, and they flew me to Berlin. I was not aware how big of a deal that was.

“It is very fun, but not for the faint of heart. Ninety-five percent of it is rejection. As long as you can deal with rejection, you can do it.”
— Genevieve Buechner

How do you feel about this career?
It is very fun, but not for the faint of heart. Ninety-five percent of it is rejection. As long as you can deal with rejection, you can do it.

How did you decide to become an actor?
I was really little and always wanted to be a singer or dancer, but we didn’t have a lot of money. My mom couldn’t really put me in classes. When I told her I wanted to be an actor, she was like, “Okay, let’s try and see.” It clicked, and I’m still doing it.

Who is your favorite actor you look up to?
I like Rooney Mara, and Cate Blanchett I’ve liked ever since I was a little tiny one. Sam Rockwell is amazing.

What would your ideal job be?
I want to do some kind of time period or fantasy because I’ve never done it and it would be so fun. I love the aesthetic of fantasy.

Do you consider yourself to be lucky?
I do. I also worked really hard for a very long time. So a little bit of both.

What advantages do you have?
I grew up pretty poor, so it’s given me a very good perspective on the world and how things are, which has been very useful.

“I want to do some kind of time period or fantasy because I’ve never done it and it would be so fun. I love the aesthetic of fantasy.”
— Genevieve Buechner

Would you rather have a car or a diploma?
Diploma. I don’t even know how to drive.

What do you think about the need for instant gratification?
I don’t think it’s always a bad thing, but I think people’s inability to be patient is not good.

How do you feel about how interconnected the world is becoming?
It’s fascinating. It’s never been that way before. It’s something in our lifetime that is so unique compared to every other time. Being able to talk to someone on the other side of the world is really fascinating.

What does the future look like to you?
A little dark right now. I’m hopeful for the best, but it looks a little sad at the moment.

How do you feel about having children?
I think that would be fun. I like children.

What challenges do you feel the world is facing today?
Global warming, climate change.

What are you most grateful for?
My friends and family and the support that they give me, and the fact I get to do what I love.

What is your favorite way to communicate?
In person. Texting is pretty great too because I can say hi to my sister who lives on the other side of the country whenever I want, but definitely in person.

What is your favorite book, film, and music right now?
My favorite books at the moment are The Kingkiller Chronicle by Patrick Rothfuss, so The Wise Man’s Fear and The Name of the Wind. Favorite movie right now is probably Léon: The Professional. Favorite music: I listen to a lot of Joe Hisaishi, who is a Japanese composer. His music is lovely.