“That’s why I went to Australia actually…

I went to save the kangaroos,

and then I ended up doing a TV show there.”

Thirst Street
Thirst Street (2017) is a dark comedy about an American flight attendant whose rendezvous with a Parisian bartender turns into a web of deception and delusion. Directed by Nathan Silver, Thirst Street stars Lindsay Burdge, Damien Bonnard, and Lola Bessis.

French actor, screenwriter, and director Lola Bessis puts her own spin on what it means to work in film. That is, she doesn’t live for other people’s vision unless she is simultaneously living for her own. Bessis concurrently broke into all three of her film professions with her 2013 film, Swim Little Fish Swim, which she wrote, co-directed and starred in. Driven by a desire to make films specifically interest to her, she has since produced a number of other short films and landed starring roles in impressive films like Thirst Street (2017), the French film Monsieur et Madame Adelman (2017) and Amazon’s new mini-series, Picnic at Hanging Rock (2018) based on the 1967 novel by Joan Lindsay about a group of schoolgirls who mysteriously disappear. Bessis talks about wearing different hats in filmmaking and her love for the environment and nature— specifically kangaroos. 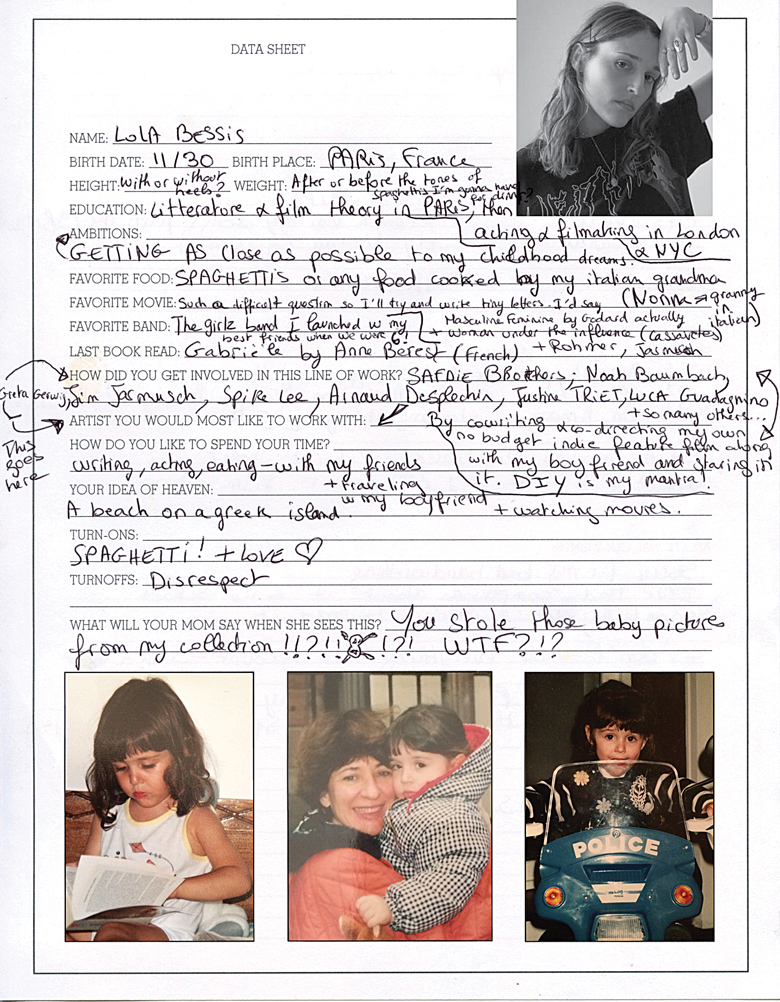 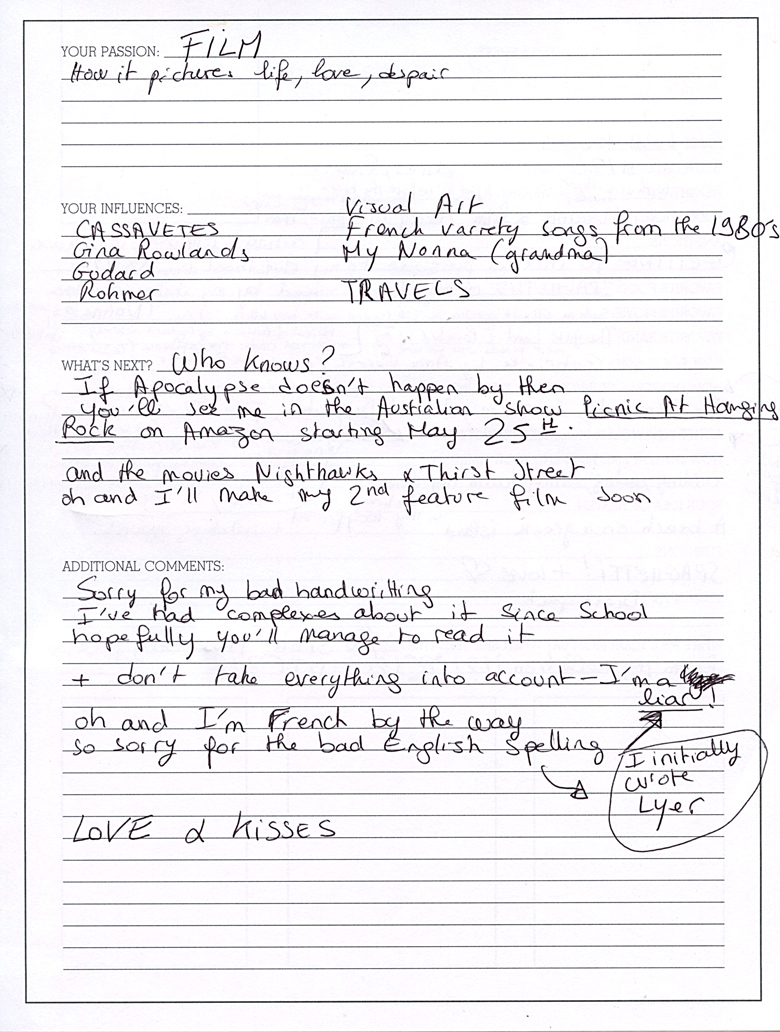 Where are you from?
Paris, France.

What was your first break?
I would say it was Swim Little Fish Swim, which is the first feature film I co-directed and starred in.

What have you been in?
I’ve been in a few French films and TV shows and more recently I did an American indie film called Thirst Street. It was shot in France. I also just did an Australian International TV show called Picnic at Hanging Rock.

How do you feel about this career?
I love it. I’m so happy I can do what I like, which is building other worlds and creating my own world and being a different person every day. I also write and direct, which is great because I can switch from one job to the other.

What was your process evolving from director to actor?
I actually started everything at the same time. When I was a child I wanted to act, but my parents told me, “That’s a bad idea. You’re going to suffer because you depend on other people’s desires. Think about another job.”

Just by chance, I was street cast and starred in a student short film. From that, I realized there was an entire world behind the camera. So I told my parents, “I have an idea. I’m going to direct my own movies so that I can star in them, and I will not depend on anybody’s desire anymore.” They didn’t know what to say to that. I ended up making my first feature film when I was 21, and I starred in it as well. So all my dreams came true.

“I get to learn new skills for each character. I had to skateboard for one part, and for another part I had to learn to do some pole dancing.”
— Lola Bessis

How would you describe your specialty or your type?
I hope I don’t have a specialty, so that hopefully I can do everything. That’s what I pretend, at least.

Who is your favorite actor you look up to?
Gena Rowlands, even though that’s not original. I love her. She’s the best.

What would your ideal job be?
What I do. When I was a kid, I also dreamed of being a kangaroo savior. I wanted to save the kangaroos because I heard that people in Australia were eating kangaroos, and I hated that because they are my favorite animal. That’s why I went to Australia actually, not just to shoot Picnic at Hanging Rock. I went to save the kangaroos, and then I ended up doing the TV show there.

Do you consider yourself to be lucky?
I’m very lucky. It’s not always easy, and sometimes you fight for something and don’t get it. It’s hard, but in the end I do what I’ve always dreamt of doing, and I meet so many great people. It changes every day so I never get sick of it, and that’s super lucky.

What advantages do you have?
I travel a lot, which I love. I get to meet all kinds of people. Also, I get to learn new skills for each character. I had to skateboard for one part, and for another part I had to learn to do some pole dancing. I also do accents. It’s like doing many different jobs at the same time.

Would you rather have a car or a diploma?
I’d love to have a car, but I don’t have my license, so I’d say a diploma is more useful.

How do you feel about how interconnected the world is becoming?
It’s very useful for me in terms of what I do, but it’s also kind of sad because it feels like each culture and each country are having less of a specific identity.

What does the future look like to you?
The near future looks okay, but I’m very scared for my children and grandchildren. I don’t know where we’re going.

“I told my parents, ‘I have an idea. I’m going to direct my own movies so that I can star in them, and I will not depend on anybody’s desire anymore.’”
— Lola Bessis

How do you feel about having children?
I’m not ready yet, but someday.

What challenges do you feel the world is facing today?
Global warming. I love nature and animals, and I’m very scared about our ecologic future and the environment we live in. War scares me as well. I hope it will end someday.

What are you most grateful for?
I’m just happy to be on this Earth, even if it won’t last long.

What is your favorite way to communicate?
Face-to-face. I hate technology. Text messaging is not my thing.

What is your favorite book, film and music right now?
The last great book I read is Gabrielle by Ann Burris, a very talented French female writer. It’s about her grandmother, who happened to be Francis Picabia’s wife and muse.

Film is a tough one. I watch a lot of French films, and I have a lot of hope for French films to get better, but it’s not happening yet. I would say Good Time by Josh and Benny Safdie.

I’m also a big fan of Princess Nokia, the rapper.