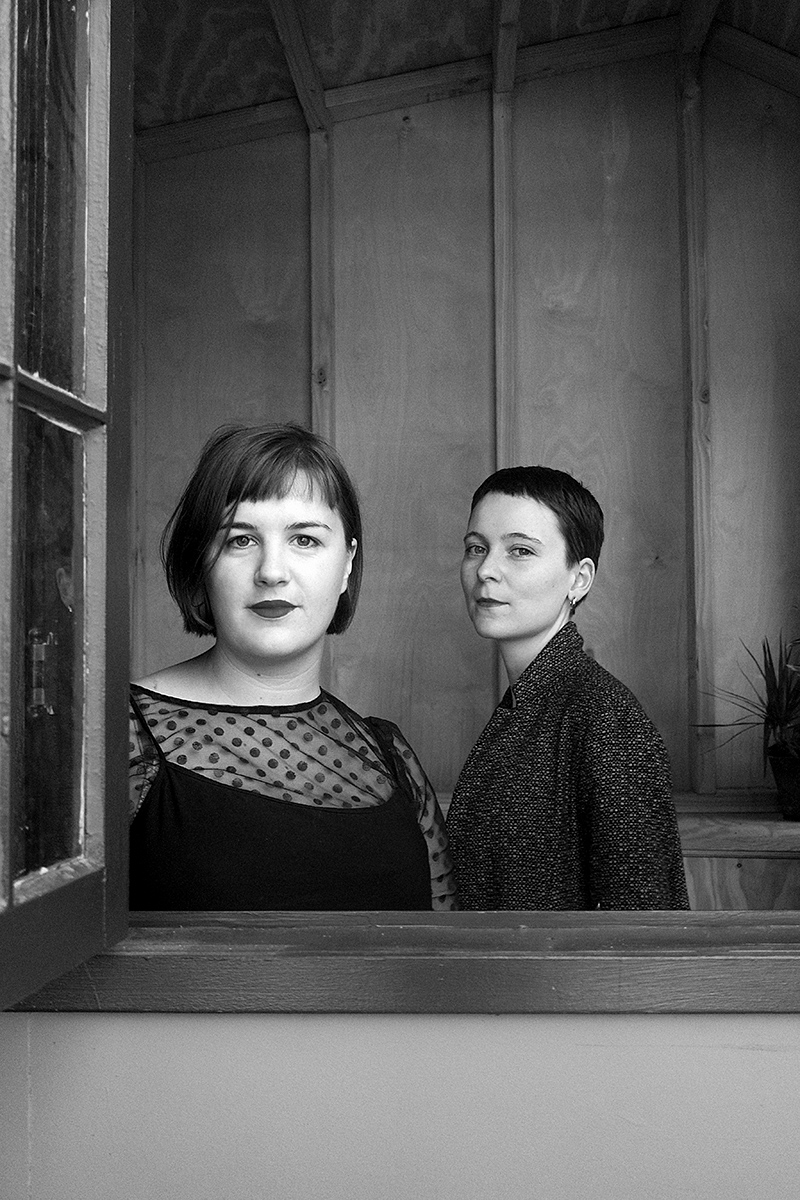 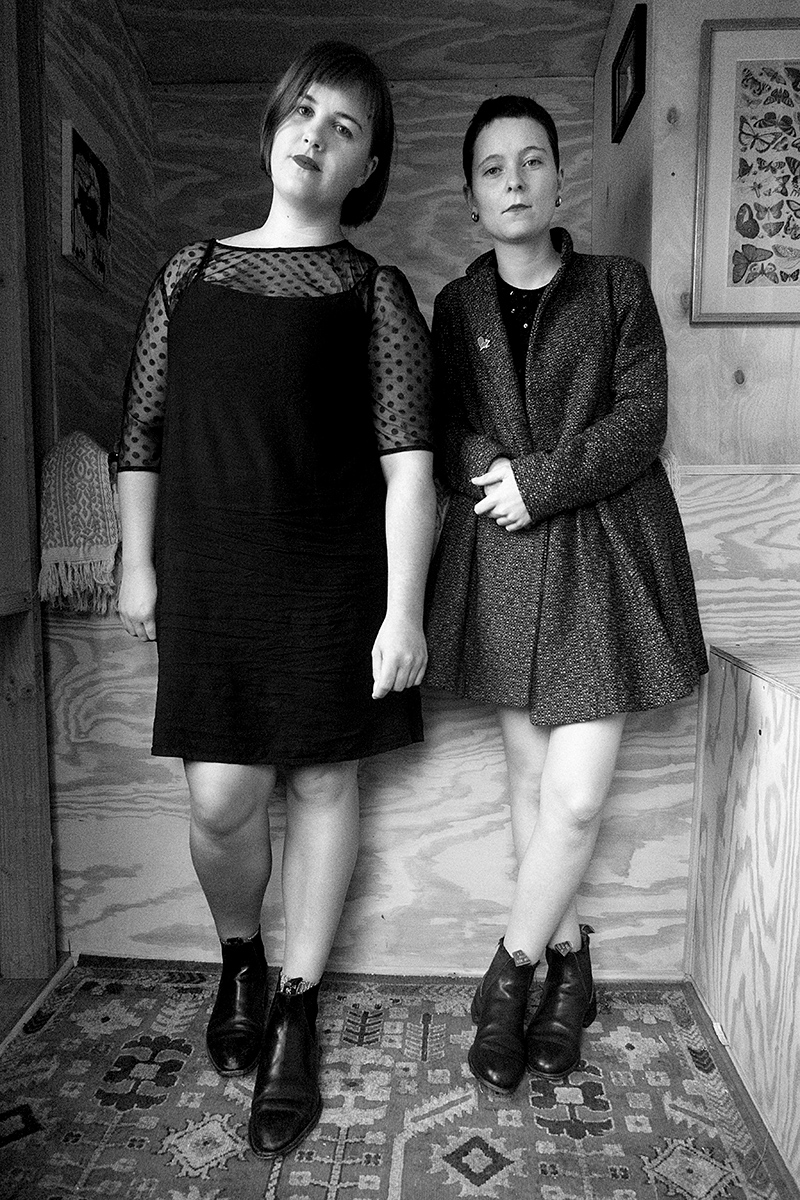 Exclusive Live Performance of “Hurt Nobody”

Exclusive Live Performance of “What's the Deal with David”

“To get people to come to our show we wrote our band name
outside in the snow. When people were going up
in the elevator and looked out of the window they could
see our name written in huge letters outside.”
— Olivia Hally

Oh Pep!
Oh Pep! Is an indie folk duo from Australia comprising Olivia Hally (vocals, guitar) and Pepita Emmerichs (violin, mandolin). After graduating from a performing arts high school in Melbourne, they toured throughout the country for years before winning a contest in 2015 that took them to the Folk Alliance International festival in America. In 2017 Oh Pep! wrapped up over a year of touring their debut album Stadium Cake with a slot at Glastonbury Festival. Over that year they shared stages with Billy Bragg, Martha Wainwright, Valerie June and The Mountain Goats. In 2018 they released I Wasn’t Only Thinking About You through ATO Records.

Since meeting at a performing arts school in Melbourne, Australia, Olivia Hally and Pepita Emmerichs of Oh Pep! have wowed audiences with their virtuosity as instrumentalists—but it’s their storytelling that has really won the hearts of fans. The duo burst first onto the scene with a series of EPs that caught the attention of high-profile artists and critics alike, and an appearance on NPR’s Tiny Desk series netted them a dedicated and passionate audience that has continued to grow.

Having been thrust into a life of touring after the release of their debut album Stadium Cake (2016), Oh Pep! have reached into this wider pool of travel and adventure to write their sophomore album I Wasn’t Only Thinking About You. Drawing on the people they’ve met and the wonder they’ve felt seeing the world, the duo explore the melody-rich expanse between indie pop and alt-folk with characteristic spirit. The band chats with us about growing up with music, unconventional methods of self-promotion, and building tiny houses.

Olivia Hally: Melbourne. I grew up on Phillip Island which is outside of Melbourne, but from age sixteen onwards I was in Melbourne and we started the band around that time.

Pepita Emmerichs: I started making music when I started violin lessons, when I was five. I probably tried to sing and stuff before that.

OH: I was a late bloomer. I started when I was seven or eight. I started with classical guitar and learning the Suzuki method.

How did you two meet?

PE: That’s where that question was heading. We met in high school. We went to a music and performance high school. Liv was in a year above me and I was lucky enough to walk around the corner at the right moment. Liv was rehearsing for a show that was coming and up and had her play the fiddle, and she asked me, so thank you.

PE: I think maybe you asked me but I don’t know.

OH: I asked if you would join me for one performance.

PE: And then I asked if we could be a band probably.

The Pigram Brothers
The Pigram Brothers are a seven-piece Indigenous Australian band from the pearling town of Broome, Western Australia, which formed in 1996. They were heavily involved in Broome’s musical and theatrical exports, including forming the original backing band for Jimmy Chi’s 1990 musical Bran Nue Dae, which received international acclaim.

Who did you listen to growing up?

OH: I remember listening to a lot of Australian artists like Paul Kelly, The Pigram Brothers, Tex Perkins, The Cruel Sea.

When do you feel you got your first break?

PE: Probably the first time someone gave us a gig. I think was through maybe an old school teacher or something. We played at the Williamstown RSL (Returned and Services League of Australia) which we’ve never played at since, and I’ve never heard of any other gigs happening there—or at least the kind of music that we play. Maybe that was our first break?

OH: I think it’s a series of little breaks that happen all the time, well, hopefully happen all the time. Another significant moment for us was when we went to Folk Alliance International. This was in 2015 and we started the band in 2009. It was well into our band life and we flew from Melbourne to Kansas City. We flew five people over from Australia. We spent all of our savings to get everyone there and to get people to come to our show.

All the shows happen in the hotel room, it’s the way the festival conference is set up, so to get people to come to our shows we wrote our name outside in the snow so when people were going up in the elevator and they looked out of the window they could see our name written in huge letters outside.

I think from us doing that and people coming to our shows we had a series of little breaks that happened. That fast-tracked a bunch of things for us. There have been a lot of things happen over the whole time.

“Liv was in a year above me in school and I was just lucky enough to walk around the corner at the right moment.”
— Pepita Emmerichs

What is the story behind the name of your band, “Oh Pep!”?

PE: I guess it’s partly our names, but we were also probably around the age of sixteen at the time and we can’t go backward. We are now Oh Pep!

Tell us a bit about your album that is coming out, I Wasn’t Thinking Only About You.

OH: It was written from 2015 to 2018 when we were touring and in between shows and everything like that. It was written all over the world and then we went back home to Melbourne to record it which was a really cool grounding experience because we’d been traveling so much.

What life events have impacted you and your music the most?

PE: I think, at least for me personally—I don’t know about you Liv—but just having gone from being teenagers into kind of adults … I don’t think I’m fully an adult yet but going through that time being in a band, touring, and also trying to figure out maybe to a degree who we are, or I am at least. That’s influenced my music.

OH: Yes, I think there are a lot of things that have happened in life that everyone experiences to some extent. Like loss and changing relationships that have all influenced our music.

What are your interests outside of music?

OH: I like reading about new things, reading books. Hanging out with friends. Really normal stuff. I really love learning about these new things and eating really good food, that is one of my favorite hobbies.

PE: Me too, just normal things. I like drawing and watching documentaries and riding my bike.

“For me personally, having gone from being teenagers into adults, going through that time being in a band, touring, and also trying to figure out to a degree who we are, or I am—that’s influenced my music.”
— Pepita Emmerichs

OH: The last time we went as a band we went to see A Star is Born which was cool and relevant being about the music business.

PE: We are doing our research.

OH: Which was really cool. I don’t think we’ve ever gone to the movies as a band before so that was really fun. We met up with everyone yesterday, we had a rehearsal and then we went out to the movies and bonded.

Gregory Alan Isakov
Gregory Alan Isakov is a singer-songwriter born in Johannesburg, South Africa in 1979. He and his family emigrated to the United States in 1986 and he was raised in Philadelphia, Pennsylvania. Isakov’s music combines indie and folk, featuring instruments such as the guitar and banjo, and he is widely known for the songs “The Stable Song,” “Big Black Car,” and “Raising Cain.” Isakov has released seven albums, most recently Evening Machines (2018).

PE: We supported Gregory Alan Isakov just a few days ago, that was the last show.

OH: Yes, that was an incredible show. It’s like this full cinematic experience.

PE: Very lush, epic and sensual all at the same time.

What is your favorite book?

OH: I don’t know about my all-time favorite book. I recently finished reading Haruki Murakami’s What I Talk About When I Talk About Running and that was really cool because I’ve started running. It’s nice to get some inspiration from him. Then I found this really great book a couple of days ago in San Francisco which was a book on how to make your own … like a DIY living. So, how to make your own everything: clothes, how to garden, make shampoo and stuff.

OH: Well I can’t on tour but eventually I might. Right now that’s my favorite book because I’m reading it.