“Two months ago I quit the Mariinsky, the most famous classical theatre
in Saint Petersburg. I guess I can relate to Polina’s path in that way.
It was a difficult decision, but we only have one life, and we don’t have
to be afraid of change!”

Anastasia Shevtsova
Anastasia Shevtsova is dancer and actor from St. Petersburg, Russia. Shevtsova trained at the Vaganova Academy of Russian Ballet and then joined the Saint Petersburg’s Mariinsky Theatre. She is the star of her first film, Polina (2016), which comes to US theaters late August, and is set to appear in Bettina Oberli’s upcoming film Le Vent Tourne.

Bastien Vivès
Born in Paris, Bastien Vivès is a French comic book artist. Vivès first came to attention via the internet under the pseudonym “Chanmax” with his penguin character Poungi la Racaille. In 2009, Vivès received the Revelation Award at the Angoulême International Comics Festival for his album A Taste of Chlorine.

Valérie Müller
Valérie Müller is a French film director and writer whose films include Le Monde de Fred (2016) and Les Hommes S’en Souviendront (2006). She and her husband Angelin Preljocaj co-directed her most recent film, Polina (2016).

Vaganova Academy of Russian Ballet
Established in 1738 during the reign of Empress Anna as the Imperial Ballet School, The Vaganova Academy of Russian Ballet is a school of classical ballet in St. Petersburg, Russia. Renamed in 1957 to honor its renowned teacher, Agrippina Vaganova, whose method of training has been taught since the 1920s, The Academy’s graduates include some of the most famous dancers, choreographers and teachers in history.

The star of her first film ever, Anastasia Shevtsova’s life recently took an unexpected turn, but not without incredible perseverance on her part. From a young age, Shevtsova trained as a classical ballerina at the Vaganova Academy of Russian Ballet in Saint Petersburg, one of the most prestigious schools of classical ballet in the world. She went on to perform as part of Saint Petersburg’s Mariinsky Ballet for two years before being discovered via Facebook to audition for Polina, a French film by co-directors Valérie Müller and renowned choreographer Angelin Preljocaj. Starring Shevtsova, Polina currently premieres in US theaters. This interview and photo session took place over video chat, as Shevtsova is currently in Switzerland shooting for her next film, Le Vent Tourne. 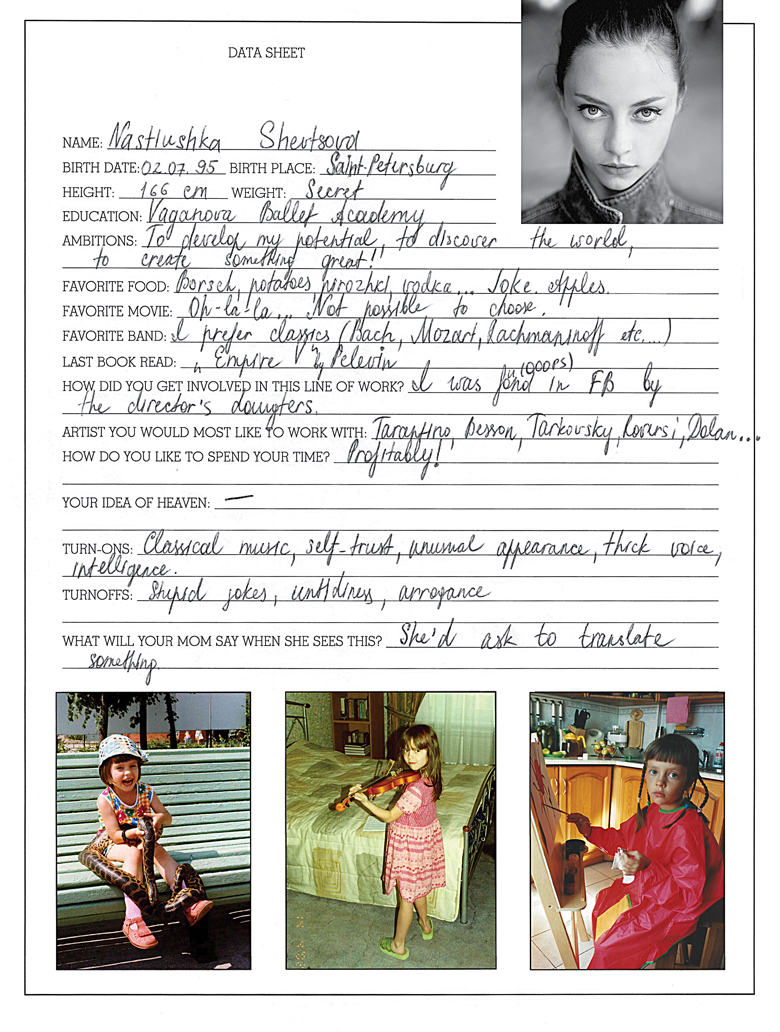 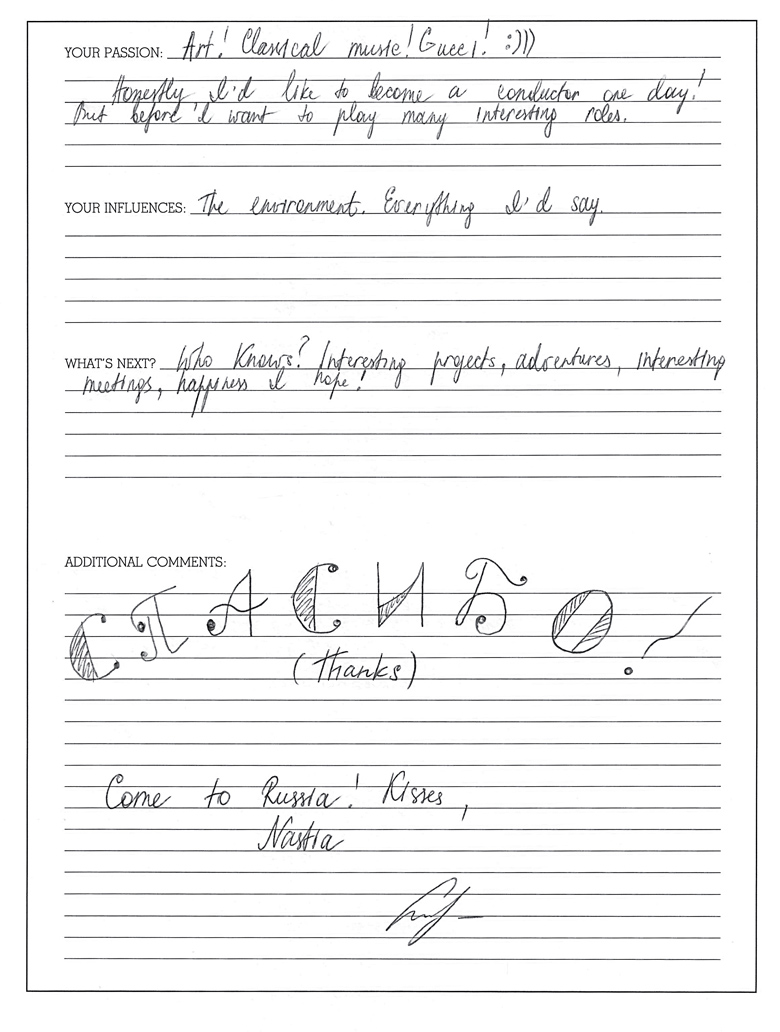 Ambitions:
To develop my potential, to discover the world, to create something great!

What was your first break?
Polina, which comes to America August 25th.

And how do you feel about this career?
I’m really excited and want to continue. I left the Mariinsky Theatre ballet company where I had been for two years, and I’m looking forward to doing more in film.

How did you decide to become an actor?
I didn’t decide, actually. But I’ve wanted to be an actress since I was a child. It happened because the daughter of the director found me on Facebook.

Who’s your favorite actor that you look up to?
Audrey Hepburn.

What role would you like to be cast in?
Something very funny, even grotesque! J’adore!

How did your role in the film Polina come about?
I was first found on Facebook. Then I passed an audition in St. Petersburg and then in Paris. I was quite nervous because many principal dancers passed this audition before me and with me, but everything went well.

What about this part interested you most?
I’ve always dreamt about being in cinema, and I was especially interested because it was a principal role. Also, I knew one of the directors, Angelin Preljocaj, from doing his work in the Academy of Russian Ballet. Other quite famous actors were also participating, like Juliette Binoche, Niels Schneider, Alexeï Guskov and Ksenia Kutepova. And I liked the story. I knew it would be challenge, which I liked!

“The heroine is a ballerina, so in that sense I did not have to get used to the role because I knew this world from the inside. It was possible to play authentically.”
— Anastasia Shevtsova

How did being a dancer prepare you for this film?
Almost half of the scenes in Polina are dance scenes, so my classical formation as a dancer and several weeks of rehearsing with Angelin and his assistant prepared me for those. The heroine is a ballerina, so in that sense I did not have to get used to the role because I knew this world from the inside. It was possible to play authentically. That’s why the directors didn’t want to just use an actress. It was so the audience could feel the truth.

What was the most challenging part?
It’s difficult to relax, open up and show yourself at first. It was hard not to be afraid to perform with professional actors. And it’s challenging to repeat the same scene with the same emotions several times over. And, of course, learning French from scratch. I worked with a tutor before shooting and did not speak English to anyone on the set, so I started to talk pretty quickly. But it was difficult to improvise in a non-native language.

How similar or different was your development as a dancer compared to Polina?
In the Academy, in my real life, it was even more tough. It’s difficult to show that in film. You have to gloss over stuff for the sake of spectators. In ballet, you become mature at a very young age. Your childhood finishes when you start dancing. But I don’t say that negatively—it was a pleasure to study. As far as differences between me and Polina, I wanted to go into classical theatre after my graduation, and also I wasn’t the best in my class like she was. But we’re similar in that I prefer modern ballet now, and I’d like to become a choreographer later.

“In the Academy, in my real life, it was even more tough. It’s difficult to show in film. You have to gloss over stuff for the sake of spectators.”
— Anastasia Shevtsova

Do you relate to Polina’s break from the traditional path? And to what extent are you facing similar choices?
Two months ago I quit the Mariinsky, the most famous classical theatre in Saint Petersburg. I guess I can relate to Polina’s path in that way. It was a difficult decision, but we only have one life, and we don’t have to be afraid of change!

What advantages do you have?
The city I was born in, the Vaganova Ballet Academy, which I finished, and the people I know.

What would your ideal job be?
A music conductor.

Would you rather have a car or a diploma?
A diploma. With a diploma I can get a car.

How do you feel about how interconnected the world is becoming?
There are many advantages, but people were more connected before. They had more time and did interesting stuff. Now, they’re with their phones all the time.

What does the future look like to you?
We have chips in our bodies, and we’re all hyper-interconnected. We’re on another planet. I don’t know.

How do you feel about having children?
It’s cool. I think it’s good to not be alone when you’re old and also to raise a person.

What challenges do you feel the world is facing today?
Intolerance, war, coldness of heart.

What are you most grateful for?
For this film, Polina. For my education, for my time in theater and my experience traveling the world.

What is your favorite way to communicate?
Speaking or dancing classical ballet.

What are you working on next?
I’m doing a French-Suisse film, Le Vente Tourne by Bettina Oberli, with award-winning actors Melanie Thierry, Pierre Deladonchamps and Nuno Lopes. I play a Ukrainian girl who has a blood disease. I have another Russian film, and after that shoots, I’d like to study acting in the US and would love to act there.

What is your favorite book, film, and music right now?
All the books of Dostoyevsky. Film: Whiplash is great. And classical music. Bach.