“Telling a story that when people walk out of the theater
they feel really touched, and it impacts
them in a special way. That would be my ideal job.”

Ella Anderson
Born in Michigan, Ella Anderson has been acting since she was five years old. She is known for her roles in The Boss, Mother’s Day, Unfinished Business as well as her reoccurring starring role on Nickelodeon’s Henry Danger. Most recently, she starred in Destin Daniel Cretton’s film adaptation of the drama The Glass Castle alongside Woody Harrelson, Naomi Watts and Brie Larson.

Michigan-born actor Ella Anderson has been performing since the age of five. Now 12 years old, Anderson has appeared in a variety of films including The Boss (2016), Mother’s Day (2016) and Unfinished Business (2015), in addition to her recurring role on Nickelodeon’s Harry Danger. She currently stars as the teenage version of Jeannette Walls in Destin Daniel Cretton’s drama The Glass Castle (2017), adapted from Wall’s bestselling memoir. Anderson appears alongside Brie Larson, Woody Harrelson and Naomi Watts in the highly anticipated coming of age film. She spoke with Issue about her career so far and what she hopes the future will hold. 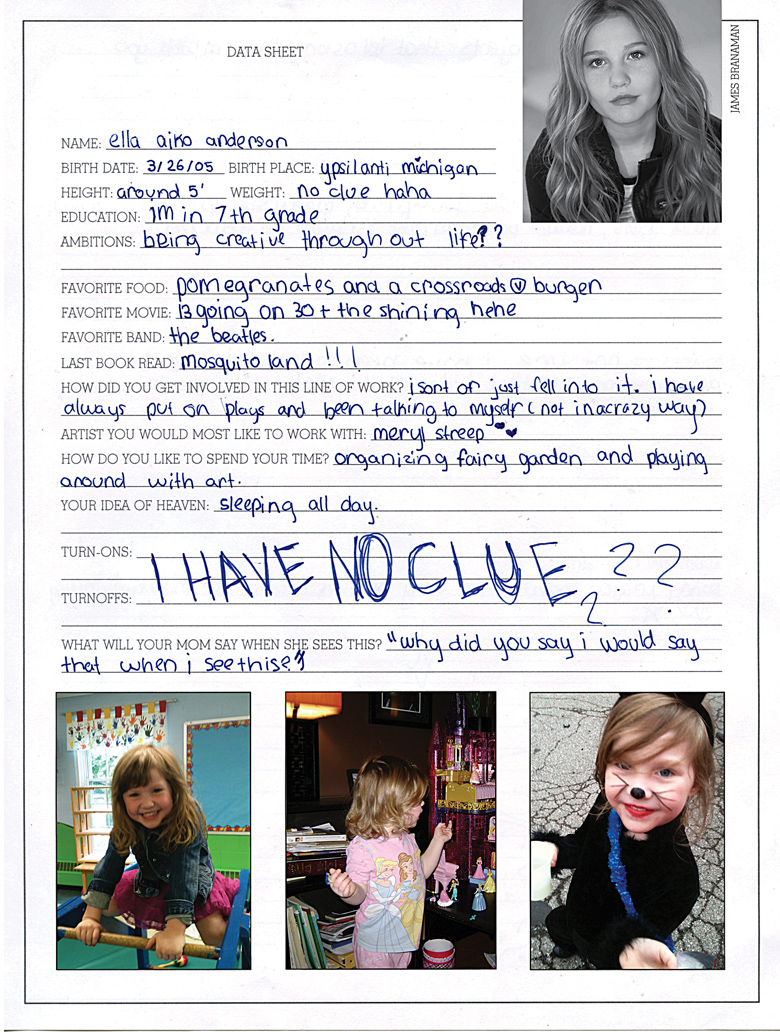 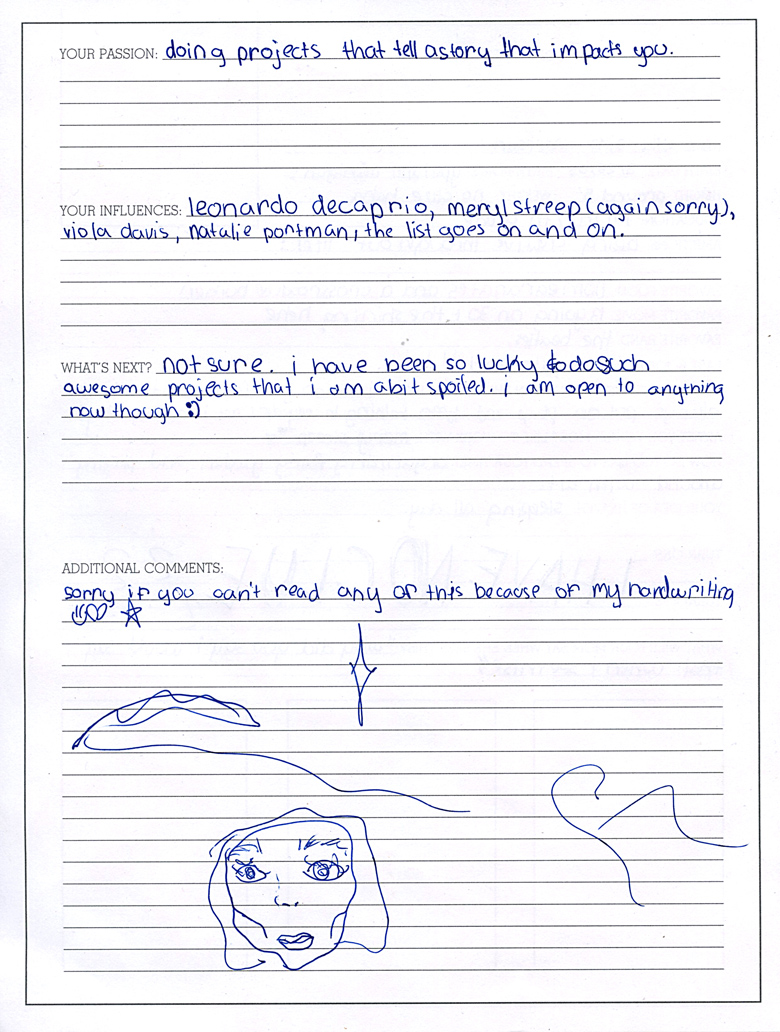 Ambitions:
Being creative throughout life??

Your idea of heaven?
Sleeping all day.

What’s next?
Not sure. I have been so lucky to do such awesome projects that I am a bit spoiled. I am open to anything new though.

So where are you from?
I was born in Ypsilanti, Michigan, but I live in Los Angeles now. So I guess I’m from here.

What was your first break?
I don’t know if I’ve even had a break yet. I’m just doing things that I like, and hopefully people will like them too.

The Glass Castle
Based on author Jeannette Wall’s 2005 memoir, The Glass Castle is an American drama directed by Destin Daniel Cretton and starring Brie Larson, Naomi Watts, Woody Harrelson and Ella Anderson. The film tells the story of Wall’s early years as part of her dysfunctional, drifter family.

What have you been in?
I’ve been in The Glass Castle, and a couple other things. Aside from that, just a bunch of little things.

How do you feel about this career?
I feel good. I think I’m really lucky to be able to do what I do and have my family support me and all of that.

“I have two older brothers and everyone told
them they should be actors,
but they didn’t really like it. Then I tried it,
and I ended up really liking it.”
— Ella Anderson

How did you decide to become an actor?
I have two older brothers and everyone told them they should be actors, but they didn’t really like it. Then I tried it, and I ended up really liking it. I’ve been doing it ever since.

How would you describe your specialty or type?
Just being authentic, I guess. I don’t know if I have like a type.

Who’s your favorite actor you look up to?
I really love Natalie Portman. She was incredible in Jackie. Sterling K. Brown. I watch him on This is Us, and cry every single time that I watch him. And of course, Meryl Streep and everyone else.

What would your ideal job be?
Telling a story that when people walk out of the theater they feel really touched, and it impacts them in a special way. That would be my ideal job.

Do you consider yourself to be lucky?
I really consider myself to be blessed because I get to do so many things. But you really have to work hard as well. So I feel sort of lucky, but there has to be a good mix. If you’re just like, “Oh, I’m lucky!” and don’t do anything, nothing’s really going to happen for you.

What advantages do you have?
I have advantages in that my family supports me so much and that I’m able to do what I really love at such a young age. I’m 12 years old, and I’m doing so many incredible projects. I have so many advantages. I’m really grateful for all of them.

Would you rather have a car or a diploma?
Since I’m 12, I don’t really know. I’m kind of scared of driving, probably because I’m 12, so probably a diploma. Driving is just a scary machine that could act up at any moment.

“I feel sort of lucky, but there has to be
a good mix. If you’re just like,
‘Oh, I’m lucky!’ and don’t do anything,
nothing’s really going to happen for you.”
— Ella Anderson

What do you think about the need for instant gratification?
The world has become so surrounded by social media. I don’t exactly have an opinion on that.

How do you feel about how connected the world is becoming?
I think it’s cool because one of my friends is in Japan right now, and I get to talk to her even though she’s so far away. But I think people are beginning to get a little carried away with it—the whole VR thing and all of that. But I think it’s pretty cool, to an extent.

What does the future look like to you?
I don’t really know! The future looks bright and happy. I hope everyone will start to understand each other and hopefully take care of the earth more. I hope I get to keep doing projects that I like. I’m 12, and I just don’t have that many plans yet.

What challenges do you feel the world is facing today?
There are so many challenges, and I feel like people pretend a lot of them aren’t real, which is not good. I think challenges in social media and people not accepting other people are really important—just realizing we are all pretty much the same.

“The future looks bright and happy. I hope everyone will start to understand each other and hopefully take care of the earth more.”
— Ella Anderson

What are you most grateful for?
I’m most grateful to be doing what I love. And my loving family and my dogs who are always at home waiting for me.

What’s your favorite way to communicate?
Talking? I don’t know! I’ve always wanted to do letters with my friends, but I don’t know who would write back. I communicate through Snapchat and all that stuff because all of my friends are on there.

What’s your favorite book, film and music right now?
My favorite book is The Glass Castle by Jeannette Walls. I’ve seen 13 Going On 30 so many times, and I also love The Shining. And for music, I like Lauryn Hill, A Tribe Called Quest. I was just listening to Skee-Lo’s “I Wish.” That’s one of my favourite songs. Any music that has a story behind it.