“My songs are the things that have really stayed with me

wherever I go. They’re my portable home that I

EZRA FURMAN
Chicago-born musician and songwriter Ezra Furman records both as a solo artist and with the band Ezra Furman & the Boy-Friends. The musician, who identifies as genderfluid, has released a total of six albums: three with his previous band (Ezra Furman and the Harpoons), one 2012 solo album and two with the Boy-Friends, Day of the Dog (2013) and his recent Perpetual Motion People (2015). Furman is currently writing a book about Lou Reed’s Transformer for the 33 1/2 series.

DU BLONDE
Du Blonde is the solo project of British musician Beth Jeans Houghton, a multi-instrumentalist and singer who left school at 16 to pursue music. Her debut album, Yours Truly, Cellophane Nose (2012), was released under Beth Jeans Houghton & The Hooves of Destiny. After a creative and emotional block, Houghton emerged as Du Blonde and released Welcome to Black Milk (2015), produced by Jim Sclavunos of the Bad Seeds.

Ezra Furman is the kind of person the old world might try to tame and dilute. This is, in part, what makes Ezra so attractive as an artist and person. In 2015, it seems the most shocking thing you can do is be yourself, completely and without hesitation. And rightly so.

Many of us have a filter through which our thoughts, opinions and personalities pass before they reach the outside world. Ezra has a different kind of filter, which strips his dialogue and expression of anything meaningless. He does not suffer small talk. Each sentence is thought out and delivered with heart and insight, no matter how long you wait while he mulls it over.

Ezra cannot be pigeonholed, and it would be a disservice to try. The best we can do is stand back, watch and learn.

Du Blonde: I’ve been thinking recently about the sense of escape that comes with being an artist, especially a touring artist. As a child, I spent a lot of time imagining my way out of situations. I wonder if this was the same for you and, if so, what methods you used to deal with this.

Ezra Furman: Yes, I grew up a dreamer. When I was five, I got in trouble for being unresponsive to any of my teacher’s questions. When my mom asked me about it, I told her I had been pretending I was in Florida, where we were going to be for winter vacation in a few weeks. I’m still displaying those kinds of habits. My mind is often elsewhere. Maybe this job, traveling all the time and making things up in my mind is an adult-life realization of that tendency towards imaginative escapism.

But then again, touring is hard work and puts you in some rough situations, at least the way I’ve been doing it. Sleeping on floors and running out of money doesn’t feel like an escape from anything. It feels more like working to make my real life resemble my inner life. Taking the weird road less travelled so I can sing songs to people.

Do you believe in escapism? Is that what we’re providing for people? I think it might be part of it.

“Sleeping on floors and running out of money
doesn’t feel like an escape from anything.
It feels more like working to make my real life
resemble my inner life.”
— EZRA FURMAN

SIBYLLE BAIER
Sibylle Baier is a German folk singer and actress who recorded music in the early ’70s. Baier’s tracks were compiled and released in the 2006 album Colour Green.

RUBIN CARTER
Rubin Carter was an American middleweight boxer whose career flourished in the early ’60s. Wrongfully convicted of murder in 1966, Carter was released from prison after almost 20 years due to a habeas corpus petition.

DB: It’s part of it, for sure. My brother recently made a point about REM sleep—through it, we have a chance to live out scenarios and their consequences before we encounter them in life. I think music, film and literature are important to the human psyche because engaging with them can be the only form of escape for some people without physically changing their surroundings. Turn on the radio, and you’re in Sibylle Baier’s kitchen, you’re in a car on the New Jersey turnpike or witnessing the trial of Rubin Carter. Songs that tell a story can be the most hard-hitting because you’re experiencing not just an abstract idea but a believable scenario, which is something I think you do very well. You have the ability to make the listener feel like they’re there with you in that little apartment in Queens.

Do you ever get stuck creatively? And do you have any techniques to climb out of that?

EF: I get stuck often. Sometimes for long periods of time. I’ve gotten freaked out about it, thinking I’ve lost some mysterious ability I can never recover, but I’ve learned that you just have to calm down, wait and listen to tons of music. The way forward always reveals itself.

DB: At your solo show in London, you said something about never really having a long-term home and that, as a result, your songs have become your home. Lacking a feeling of home is unique to touring artists. On the road you might yearn for a place to lay your hat for a while, but I know if I’m in one place more than a month or two, I get the urge to go. Without that sense of adventure and discovery life feels stagnant, and in those times I’m prone to depression. Are you any good at staying in one place when your schedule allows?

EF: I’ve heard about this phenomenon of post-tour depression, but it’s not my experience. I get depressed about as much on tour as off. For me, coming home is like drinking sweet nectar. I’m always aching for it by the end of the tour. Then again, I’ve changed cities almost every year for the past ten years. So I am addicted to a certain rootlessness. But it bothers me too. I’d like to become part of a community in a deeper way. I feel like a drifter.

Looking back over the years, my songs are the things that have really stayed with me wherever I go. They’re my portable home that I reassemble for myself in every city I move through. When I’m touring, I’m a guest in someone else’s home, but at my shows it’s like inviting people into my home, too. I think part of what’s made me improve as a songwriter is realizing that the songs are going to stay with me for years. I’m building my home, so I’ve got to make it sturdy.

DB: A lot of your lyrics, especially on your new record Perpetual Motion People, read like an internal conversation, as if we’re witnessing your stream of consciousness as you try to hash things out. I’ve found that the more honest I am lyrically about my internal struggles, the looser their grasp on me during everyday life. Do you find writing to be cathartic?

EF: Writing songs doesn’t really help me deal with anything. Sometimes my habit of using my dark moments as material backfires. For instance, if you scream, “I wanna destroy myself” night after night for rooms full of people, it starts to feel like poking a wound. Reliving the night I wrote that song again and again might not be healthy.

It’s very satisfying to capture a real feeling I’ve had in song. There’s a deep satisfaction in telling an emotional truth, and a feeling of release often accompanies it. I hide my feelings all the time to get along in social life, so a tension builds up that demands release. That’s the cathartic part.

DB: Recently, I’ve been thinking about the industry’s habit of pushing for lengthy album cycles. A lot of labels seem intent on putting out a record every two or three years. This can work well for some people, but for prolific writers it can be a problem. You either end up losing good songs in the process or putting too much pressure on creating something you have to be happy touring for two years. I was wondering if this affects you and whether or not you think it works for fans in an era of accelerated consumption?

EF: Though I don’t blame the record companies—they juggle a lot of concerns and do their best—it’s frustrating sometimes since I do write a lot of songs. I could probably release three or more records a year if all the marketing and financial concerns weren’t a factor. I write enough.

Good songs get left behind because, by the time I’m recording, they’re already years old and I’m more excited about newer ones. I lose plenty of them. It messes with my head, but there are also advantages to having to wait. It prevents me from releasing something on a whim that might embarrass me later. And it causes me to weed out more of the songs that are just okay. I think the pressure it creates makes records better more often than it makes them worse.

What do you think? Should we rip up the script of the record biz and find a new way?

DB: I think we should, if only for the experiment. If I’m given long enough, I become a chronic over-thinker and regress creatively.

Although holding down a career in music is difficult and a regular income is just a dream, I believe we’re incredibly lucky to have the opportunity to spend so much time doing what we love. What do you love about your life as a musician?

EF: I like when I get to play a minor ninth chord. I like meeting people who like my songs. I really like hearing how my songs have shown up in people’s lives—on a mix CD, a road trip, a playlist for taking a break at the office. I feel honored that my record is useful to people in those ways.

DB: Life on a tour bus is sometimes misrepresented as some glamorous experience: good-looking people lounging around playing Led Zep covers and drinking beer while someone is getting head in the corner and the sun sets behind a mountain range. In reality, nobody has washed, everybody is tired, someone is a jerk, everybody else is offended and nobody has any money. Things can get pretty weird conversation-wise. Can you recall any particularly bizarre tour bus conversations?

EF: It’s not glamorous, but it certainly can be romantic. I don’t travel on tour buses thus far—a cramped van seems to work just fine—but regardless of vehicle, things always get bad at some point on tour. No one sleeps enough, and you never get a minute alone. It’s a recipe for madness.

Last tour we started taking online tests that answer the question, “Are you a psychopath?” We all turned out to all be more psychopathic than average.

DB: Which leads into my next question: would you rather eat powdered concrete or cat shit? 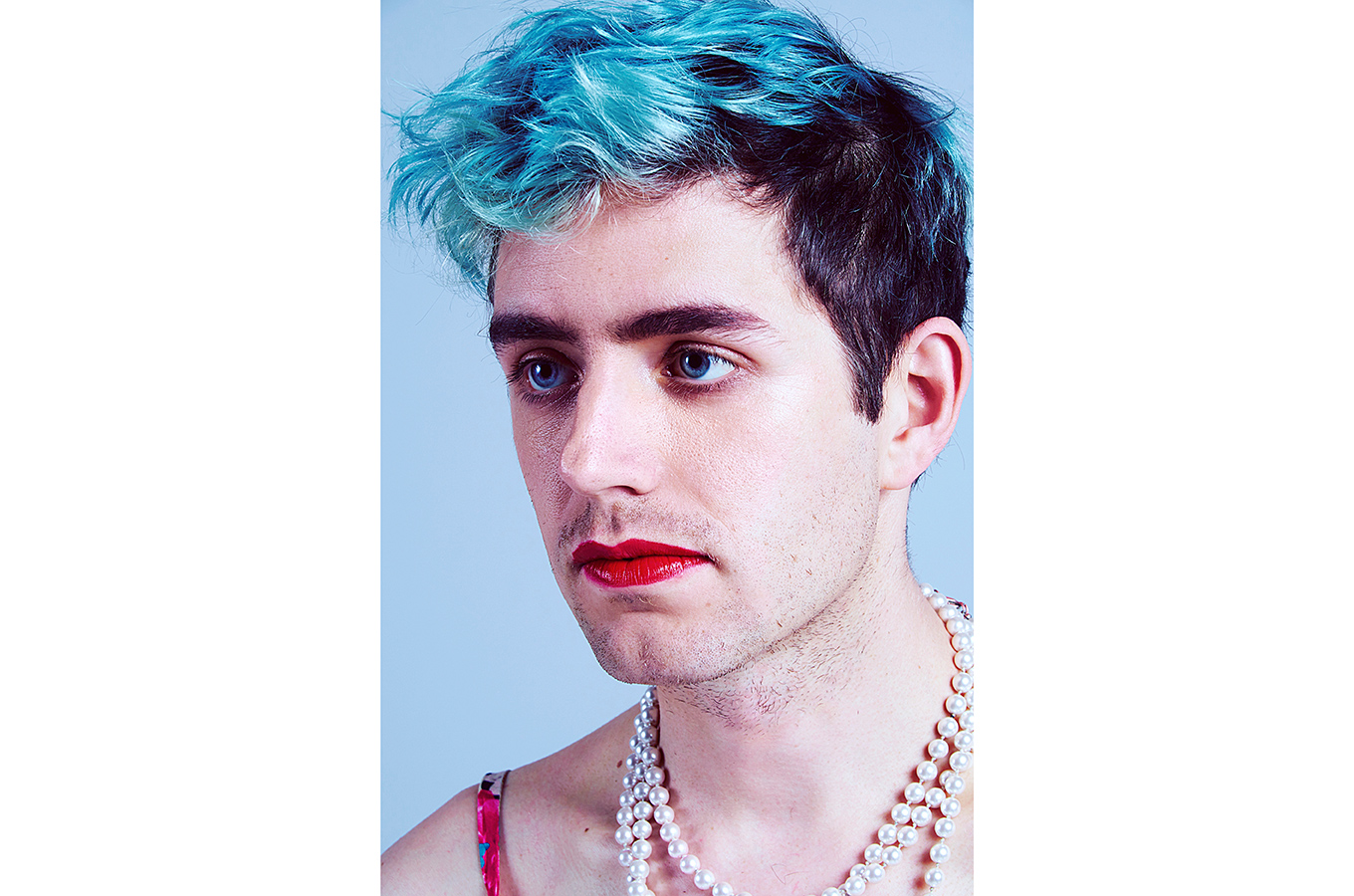 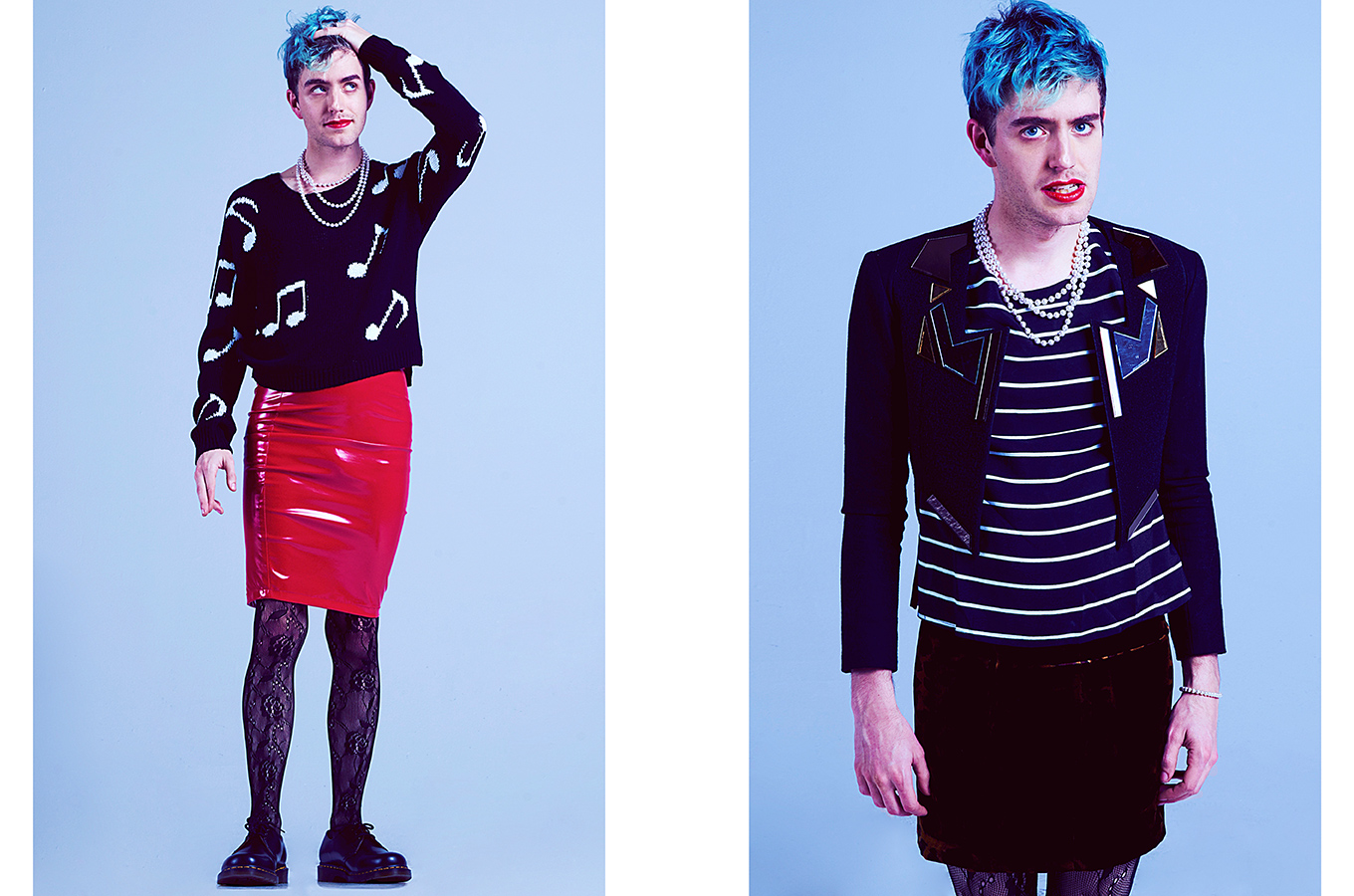 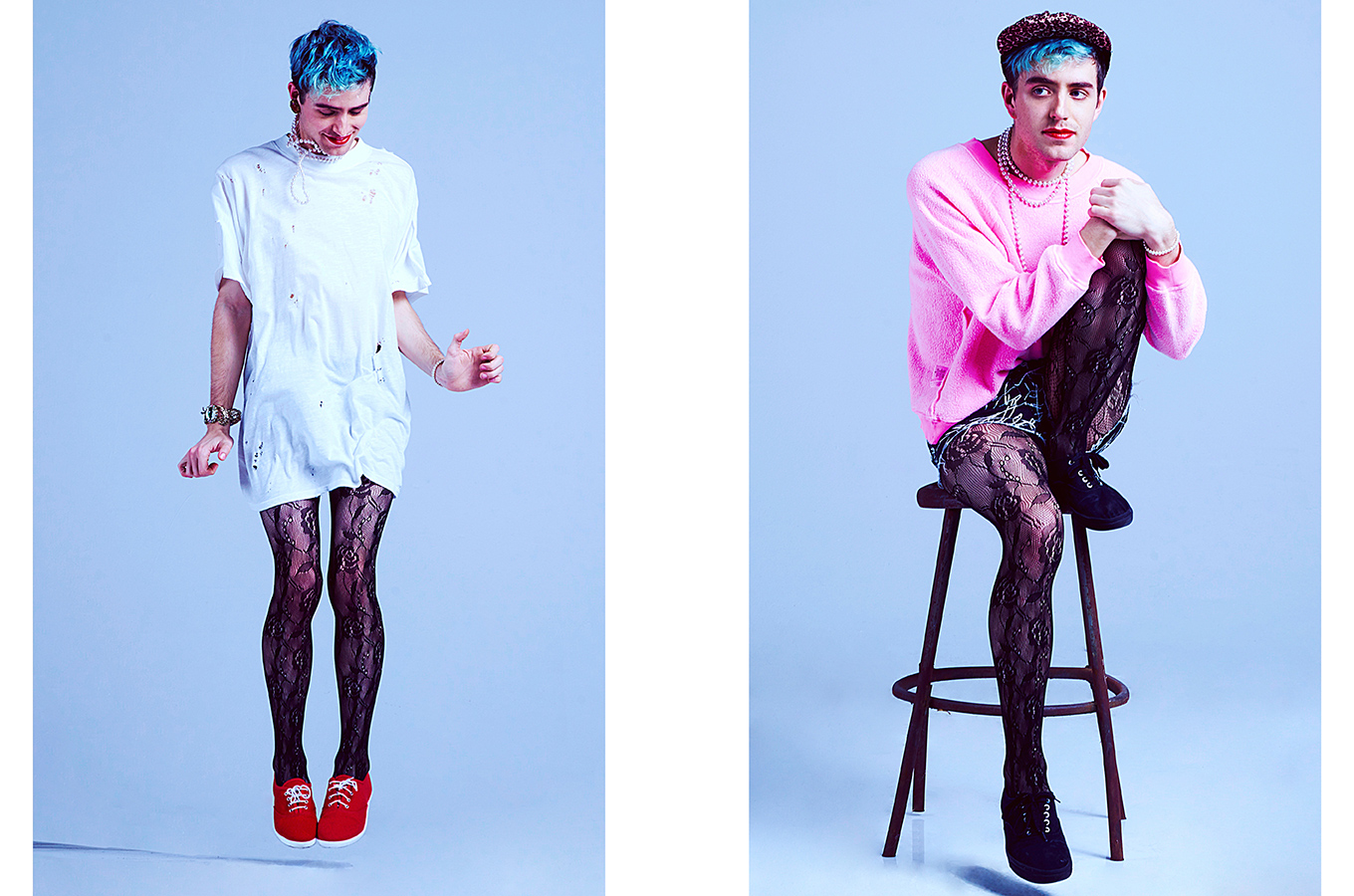 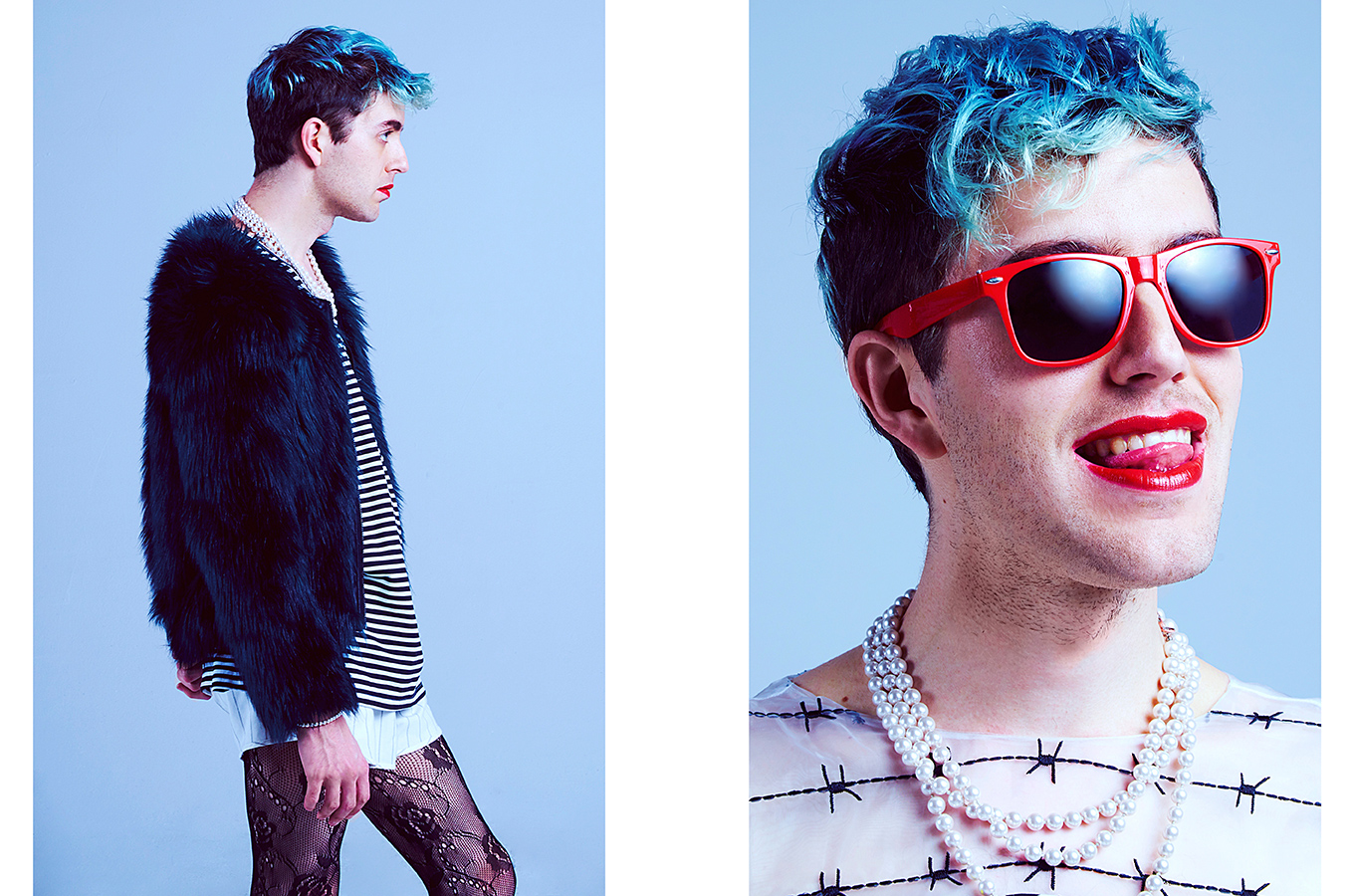