“I think everything in the world is either rooted in love or fear,
and fear is kind of on the rise lately.
And that troubles me, but in the long run, love does win out.”
— Jen Richards

Jen Richards
Jen Richards is a transgender writer, actress, producer and activist. In 2015, she appeared as a supporting cast member of Caitlyn Jenner’s reality show I Am Cait. In 2016, she co-starred, co-directed, co-wrote and co-produced the web series Her Story, which was nominated for an Emmy Award. Richards also co-produced the series More Than T and wrote the Trans 102 series. She joined the cast of the television series Nashville in 2017, becoming the first openly transgender person to appear on a CMT show. Richards also appeared in the 2017 film Easy Living. In 2019, she received rave reviews for her portrayal of “Young Anna Madrigal,” in episode 8 of Netflix’s critically acclaimed series, Tales of the City.

Mrs. Fletcher
Mrs. Fletcher is an American comedy miniseries based on the novel of the same name written by Tom Perrotta. The series stars Kathryn Hahn and premiered on HBO on October 27, 2019. The series follows divorcee Mrs. Eve Fletcher (Hahn) and her son Brendan. When Brendan goes to college as a freshman, Eve experiences sexual reawakening and sexual fulfillment that eluded her in her younger years.

Her Story
Her Story is a 2016 drama web series produced exclusively for Internet distribution. The show tells the story of two transgender women, played by Jen Richards and Angelica Ross. It was nominated for a Primetime Emmy Award for Outstanding Short Form Comedy or Drama Series, and won the Gotham Independent Film Award for Breakthrough Series, Short Form. It also won a Special Recognition award at the 28th GLAAD Media Awards.

Jen Richards burst onto the entertainment scene when she received a Primetime Emmy Nomination for Her Story, a series she created, wrote and starred in about the dating lives of trans women. Since then, Richards has made regular appearances in popular primetime shows like Nashville, Doubt and Blindspot. Now, in HBO’s Mrs. Fletcher, Richards shines as a series regular Margo Fairchild, a transgender community college writing teacher. Jen speaks with us about luck, interconnectedness, and living out her father’s dreams. 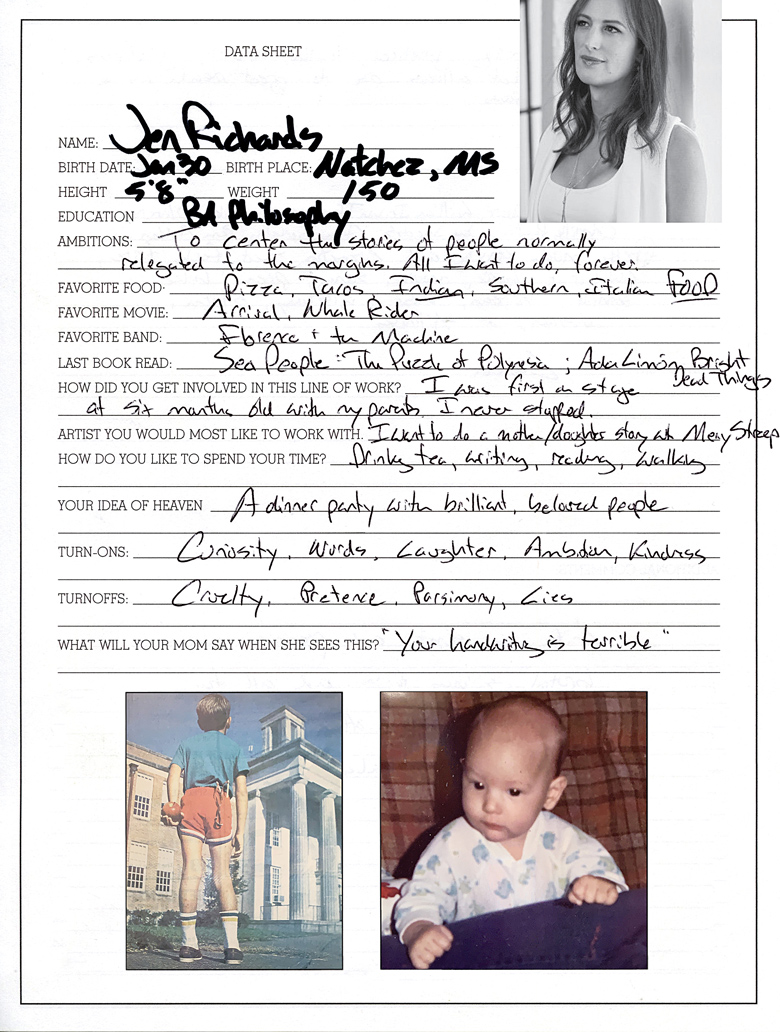 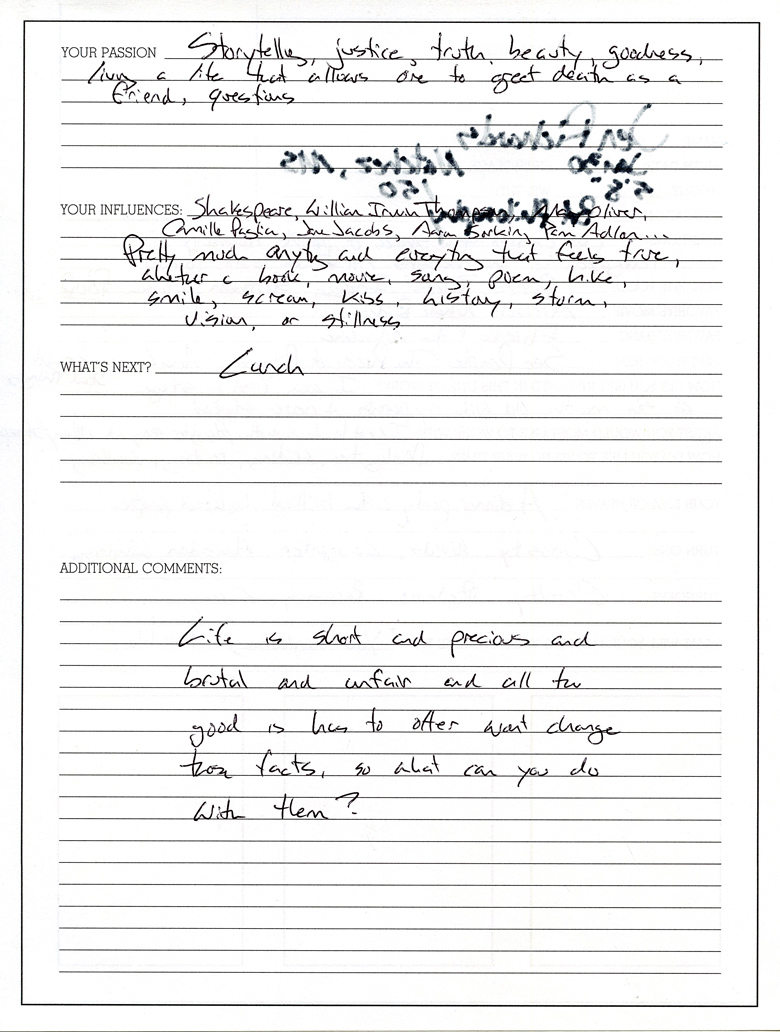 Where are you from?
I was born in Natchez, Mississippi, and grew up outside of Chicago. I’ve been in LA for about five years, but I definitely have southern roots—that’s where all my family is.

“A good friend of mine is a famous astrologer, and when she looked at my chart, she’s like, ‘Wow, everything works out for you doesn’t it?’. And yeah, it really does.”
—Jen Richards

What was your first break?
My first break I kind of made myself; I wrote and starred in a web series called Her Story. A bunch of friends of mine and I made it together. I co-wrote and co-starred and it ended up getting nominated for an Emmy and won a bunch of other awards. We were all kind of shocked and delighted and surprised and it opened doors for a bunch of us.

What have you been in?
I’ve been in a few things. Right now I’m in Mrs. Fletcher on HBO, Tales of the City on Netflix, Blindspot on NBC, Better Things on FX. I had a run on the show Nashville, then a couple of little indie movies here and there, short films—wherever they want me.

How do you feel about this career?
I cannot believe that I am actually living out my dreams. I always wanted to be a writer and an actor ever since I was a kid. So did my father who passed away when I was young, and I found out later that I’m kind of outing out his dreams as well. So it really is a dream come true.

How did you decide to become an actor?
I don’t remember a time when I wasn’t acting and writing, I was first on stage when I was six months old, as both my parents were actors in Mississippi, and I just never stopped.

Who’s your favorite actor you look up to?
There are a lot of actors I love, but the one that comes to mind is Carrie Coon who is a phenomenal actress who is in the show The Leftovers. She had this run in The Leftovers that was just transcendent, with a kind of nuance and sensitivity and range of acting that you rarely ever see. It didn’t get any formal awards, and that’s always going to be my reminder that the best work does not always go recognized, but it’s valuable none the less—it stands the test of time.

“I think everything in the world is either rooted in love or fear, and fear is kind of on the rise lately. And that troubles me, but in the long run, love does win out.”
—Jen Richards

What would your ideal job be?
I’m doing my ideal job. Acting and writing, being part of this little industry that can help shape the world through storytelling, that’s a gift.

Do you consider yourself to be lucky?
I’m extraordinarily lucky, and not only is my life objective evidence of that, but a good friend of mine is a famous astrologer, and when she looked at my chart, she’s like, “Wow, everything works out for you doesn’t it?”. And yeah, it really does. It drives my brother crazy cause he has the opposite luck.

Would you rather have a car or a diploma?
I would rather have diplomas plural. I don’t have a car and I’m pretty fine with that, but I would just go to school forever if I could—I love being in school.

How do you feel about how interconnected the world is becoming?
It’s thrilling to see how interconnected the world is becoming. I just read a novel set in southwestern China, an indigenous tribe that does a rare kind of tea called Pu’er. The fact that I can learn about this little mountain tribe, half a world away, and really know what it’s like from their perspective, that’s also a gift.

What does the future look like to you?
I don’t really speculate a whole lot about the future. There are certainly trends that are exciting, I do love how interconnected we are becoming, I love what technology makes possible, but what most excites me about the future are the things that I can’t even imagine—that’s what’s cool about it.

What challenges do you feel the world is facing today?
The big challenge right now is this resurgence of right-wing populism which is ultimately rooted in fear. I think everything in the world is either rooted in love or fear and fear is kind of on the rise lately. And that troubles me, but in the long run, love does win out.

“In a life that is full of blessings, the one that I cannot wrap my head fully around is how wonderful my friends are; how much I really enjoy them, how much they are always there for me, and how much richer they make my life.”
—Jen Richards

What are you most grateful for?
I’m most grateful for the people in my life. I mean in a life that is full of blessings, the one that I cannot wrap my head fully around is how wonderful my friends are, like how much I really enjoy them, how much they are always there for me, and how much richer they make my life.

What is your favorite book, film and music right now?
Right now, Oh God, there are so many, I love nineteenth-century British literature, so I’ve been reading a lot of Jane Austen. I’m reading Middlemarch right now, enjoying that.

Music, Florence + the Machine, although I’ve been listening to Vivaldi and Handel all day.

Movie-wise, oh gosh, I’ll say this, Arrival is the only movie I’ve ever seen in the theatre three times, I loved it that much. Denis Villeneuve can do no wrong.