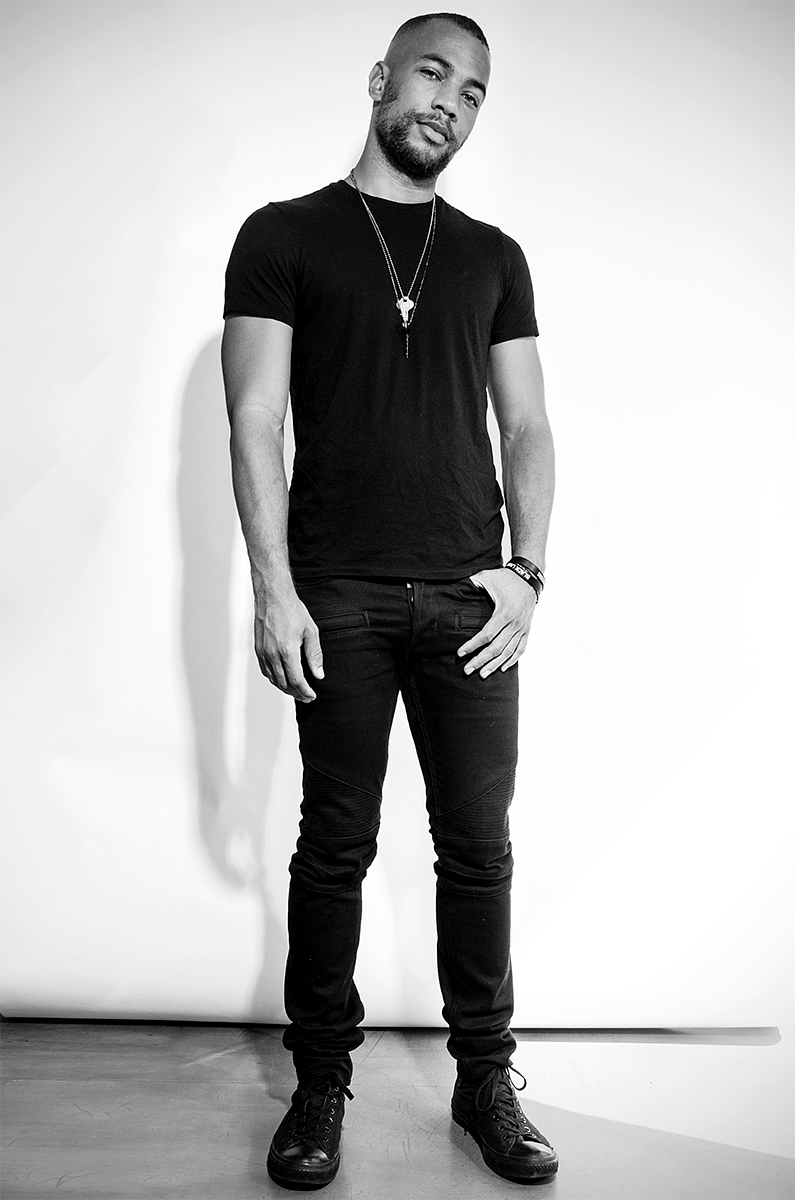 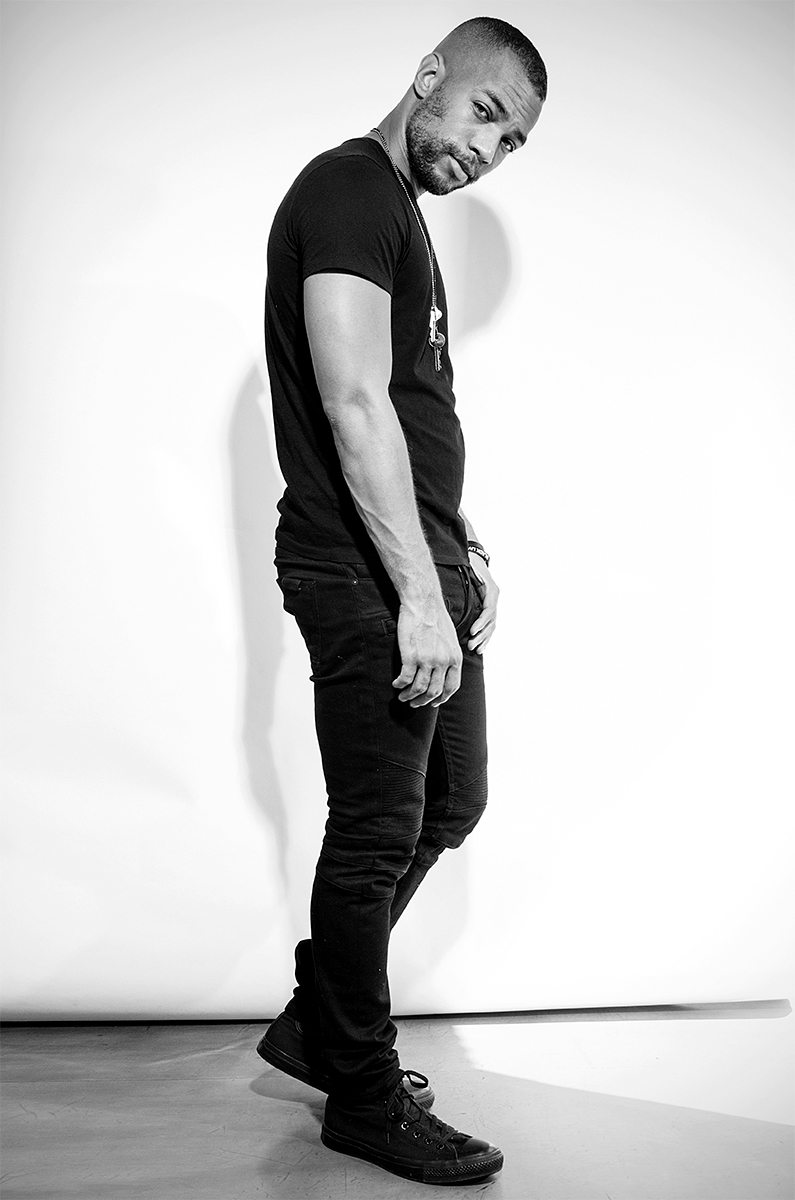 “My career is just a piece of my purpose.
It doesn’t define me, and I know I’m here to uplift the voices of
the most vulnerable communities and people of color.
This is my purpose in life and my career services that.”
— Kendrick Sampson

Kendrick Sampson
American actor Kendrick Sampson expressed an interest in acting at a young age after seeing a Gap commercial. He eventually started performing in the theater program at Elkins High School, Texas, and found an agent. In 2010 Sampson was cast in an episode of CSI: Crime Scene Investigation. From there he appeared in the TV miniseries Gracepoint (2014) and The Vampire Diaries (2009–2017), followed by How to Get Away with Murder (2014-), The Flash (2017-), White Famous (2017-), and Insecure (2016-) to name a few. Sampson runs his own production company called Sampson Studios.

Insecure
Insecure (2016–) is an American comedy-drama television series based partially on Issa Rae’s acclaimed web series Awkward Black Girl. It was created by Rae and Larry Wilmore and premiered in September 2016 via HBO Now and HBO Go. The series was named one of the Top 10 Television Programs of the Year by the American Film Institute in 2017, and earned two Golden Globe Award nominations for Best Actress—Television Series Musical or Comedy, in 2017 and 2018, as well as a Primetime Emmy Award nomination for Outstanding Lead Actress in a Comedy Series.

How to Get Away with Murder
How to Get Away with Murder (2014–) is an American drama television series created by Peter Nowal, and produced by Shonda Rhimes and ABC Studios. Viola Davis stars as Annalise Keating, a law professor at a prestigious Philadelphia University who—along with five students— becomes entwined in a murder plot. Davis has received critical acclaim for her portrayal; she became the first black woman to win an Emmy Award for Outstanding Lead Actress in a Drama Series, and also won two SAG Awards for Outstanding Performance by a Female Actor in a Drama Series as well as two Golden Globe nominations.

Currently making waves as ‘Nathan’ on the popular HBO comedy Insecure (fans on Twitter call him ‘Lyft Bae’), Kendrick Sampson is no stranger to playing diverse characters from comedic to thrilling. His work includes the Golden Globe-nominated crime drama How to Get Away with Murder (2014–), popular comedy series White Famous (2017–). and award-winning action series The Flash. Outside of acting, he’s not afraid to use his voice and is heavily involved in the Standing Rock movement and Black Lives Matter, as well as advocating for criminal justice reform and uniting oppressed communities. He speaks about his love of storytelling, maintaining perspective, and why we need to celebrate—rather than overlook—our differences. 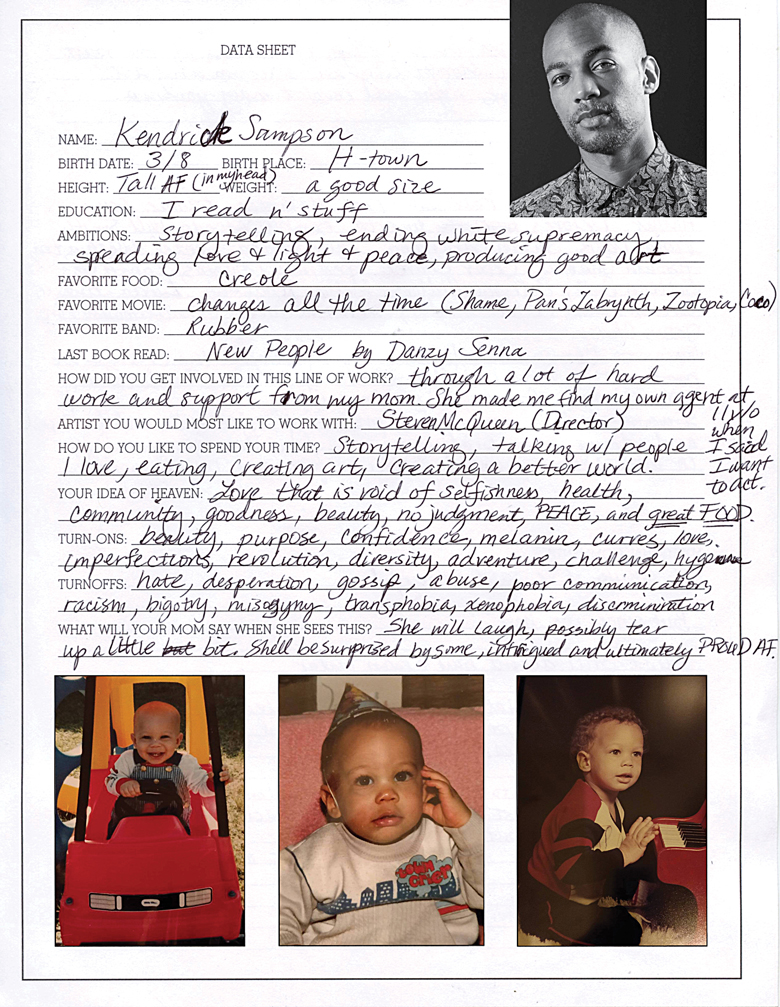 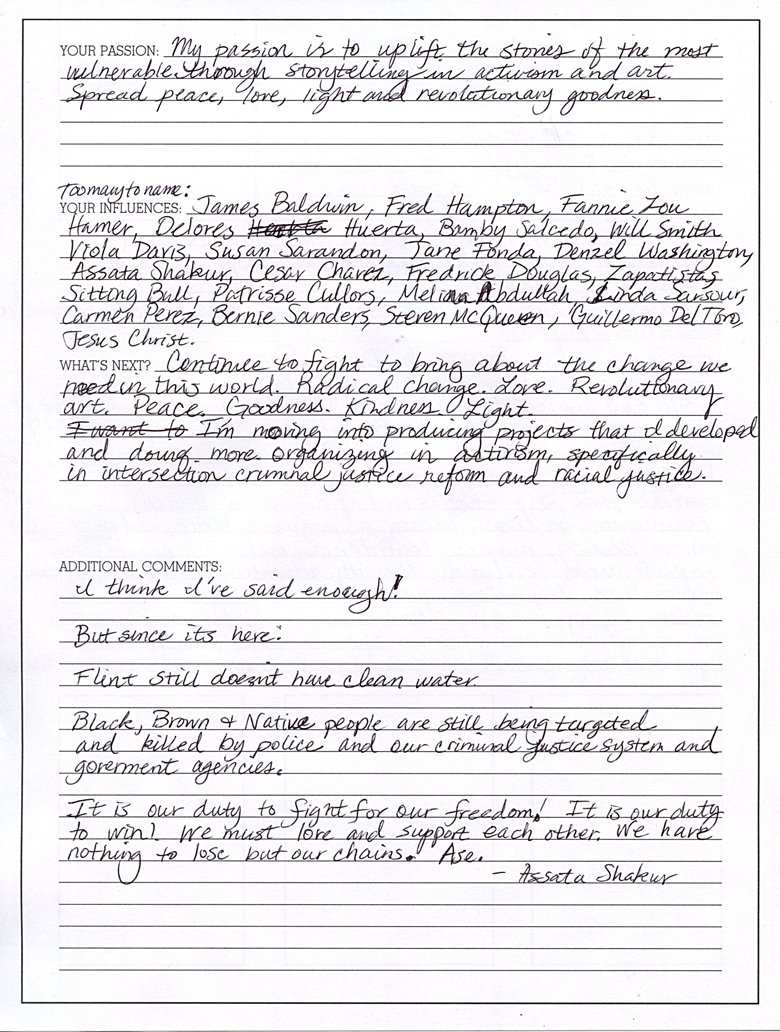 Where are you from?
Houston, Texas.

How did you get involved in this line of work?
Through a lot of hard work and support from my mom. She made me find my own agent at 11 when I said I want to act.

Artist you would most like to work with:
Steven McQueen (Director)

What was your first break?
I’m still waiting on it. I don’t know it depends. I think it’s gone on several phases, Vampire Diaries and How to Get Away with Murder, Insecure, Ball Pen. Different stages of breaks. Breaking through.

What have you been in?
Those! And White Famous; I played a British dude named Robbie. In Vampire Diaries I played Jesse. In The Flash I played Brainstorm and in How to Get Away with Murder I got to play Caleb. And now in Insecure I’m playing Nathan.

How do you feel about this career?
I feel like it’s good. I get to play a bunch of very different characters with different accents from different backgrounds, and people of color don’t get to do that very often. I’ve been super, super grateful and I hope it continues.

How did you decide to become an actor?
I did a T-chart in ninth grade. I’m not going to say I always wanted to be an actor, but since maybe sixth grade. When I got to ninth grade I was deciding between that and law, so I did a T-chart. I did the pros and cons and I was like, which one do I want to do?
I decided that storytelling was my strength and that’s what I loved. And I loved all of it. Even the annoying aspects of it, just because I knew the end result was storytelling with creating. That’s my passion and that’s the best way I can serve the world.

How would you describe your specialty or type?
I want to be more of a character actor, that’s what’s exciting—playing a bunch of different characters. But I also love playing things that are really close to me, where I have to play with my vulnerability and be portrayed in that light. I don’t know. There are many diverse different characters that I can play.

“I get to play a bunch of very different characters with different accents from different backgrounds, and people of color don’t get to do that very often.”
— Kendrick Sampson

Who is your favorite actor you look up to?
So many, I don’t know. I have a lot of buddies that I love. Rosario Dawson and Matt McGorry and Mark Ruffalo, Shailene Woodley, Will Smith. I don’t know Will Smith but I look up to him. I look up to a lot of my buddies just because of how they use their platform and their artivism and they are also great talented actors.

What would your ideal job be?
My ideal job would be a project that I create and am producing, and then I can act in that. That would be a dream and a goal come true, one that I’m working really hard on, and I can’t wait until that happens.

Do you consider yourself to be lucky?
To be honest I don’t believe in luck. I believe I’m blessed, I believe I’m purposed and I’m walking in that, and whatever happens with that happens. Even if in hard times, that is still a blessing. I’m doing my best to be intentional and purposed in that, whatever that is and whatever comes my way. I’m very grateful for everything.

What advantages do you have?
Perspective, I think. I know that my career is just a piece of my purpose, it doesn’t define me and I know that I’m here to uplift the voices of the most vulnerable communities and people of color. That is my purpose in life and my career services that. So it doesn’t depend on it. My whole life isn’t my career so my perspective is probably my biggest advantage.

How do you feel about how interconnected the world is becoming?
I think there are pros and cons to it. I think the pro is that we see things happening all over the world and we can be inspired by somebody all the way across the world but also—especially with the news and stuff like that—it’s overwhelming. It gives us less of an excuse not to communicate and then puts more pressure on communicating and it’s stressful but at the same time it’s beautiful and advantageous in a lot of ways.

“We’re not celebrating each other’s differences enough, and that leaves us to hate each other and think that because somebody’s different they might be coming in to take what I’ve got.”
— Kendrick Sampson

How do you feel about having children?
I think I want them, and I think it’s a huge responsibility and test of character.

What challenges do you feel the world is facing today?
Jesus Christ. Well … that lack of Jesus Christ. Lack of love and respect, too much fear, too much hate in this country, too much white supremacy—and in many countries I guess. Too much socio-economic disparity and not enough celebrating of differences. I hear too many people say, “I’m color-blind and I don’t see gender and I don’t see color” and all that kind of stuff.

What is your favorite book, film, and music right now?
I loved The Shape of Water last year. I don’t know, there’s so many. I guess that’s really hard. I just read My Love, My Love by Rosa Guy. That was really good. The Alchemist [by Paulo Coelho] is still one of my favorite books of all time. Right now I’m listening to Ozuna and his new album Aura, and Beyoncé and Jay-Z because I just went to their concert. And Kendrick Lamar. Mine changes every day.