“There’s more awareness of the challenges that we’re facing,
but I think racism, prejudice, and poverty have always been there.”
— Nikohl Boosheri

Nikohl Boosheri
Born in Pakistan and raised in Canada, Nikohl Boosheri is an actress known for her roles in Circumstance (2011) and Freeform’s The Bold Type (2017-). She has also starred in award winning director Meena Menon’s Farah Goes Bang (2013) and has a recurring role on Netflix’s Altered Carbon (2018).

Circumstance
Circumstance is a 2011 drama directed by Maryam Keshavarz and starring Nikohl Boosheri and Reza Sixo Safai. The film, which won the Audience Award at Sundance, follows an Iranian family’s attempts and struggles to contain sexual rebellion and dangerous obsessions.

Canadian actress Nikohl Boosheri has made a name for herself in politically engaged film and tv roles. She received multiple Best Performance Awards for her work in 2011 Sundance Audience Award-winning film, Circumstance, which was secretly shot in Lebanon and later deemed ‘anti-Islamic’ by the Iranian government. Boosheri is also a series regular on Freeform’s The Bold Type, and Netflix’s sci-fi dystopian series Altered Carbon (2018) based on the 2002 novel by Richard Morgan about transferring memories through alien-developed technology. Boosheri talks about the types of roles she’s attracted to, social media’s generational impact, and her love for Moulin Rouge. 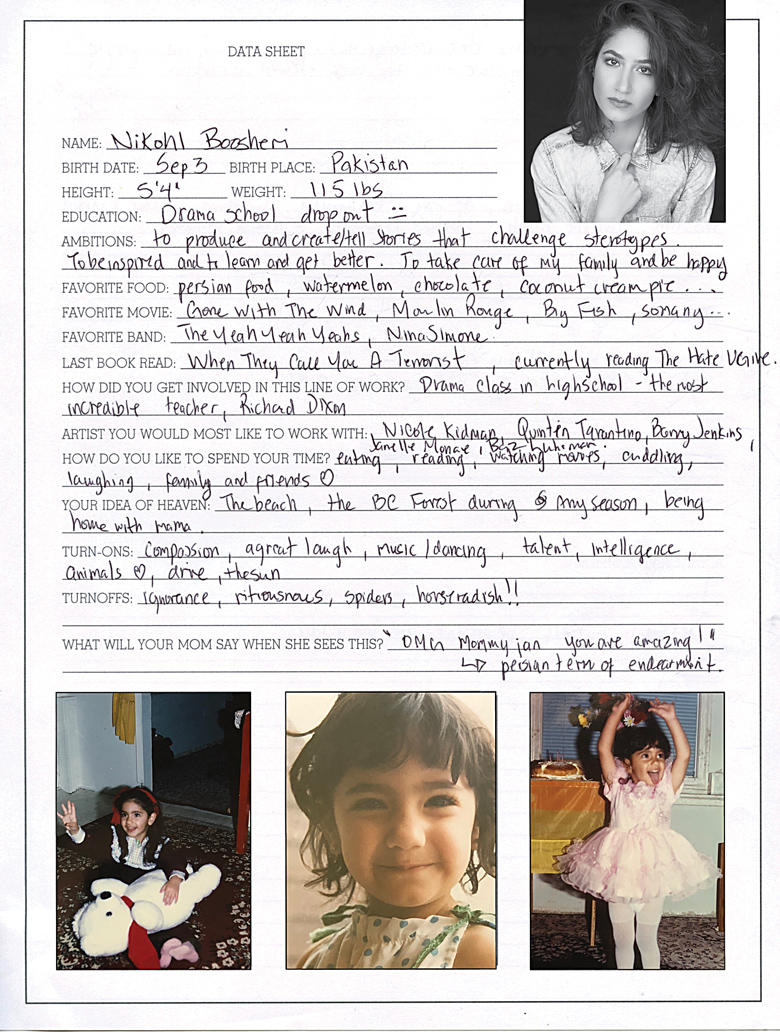 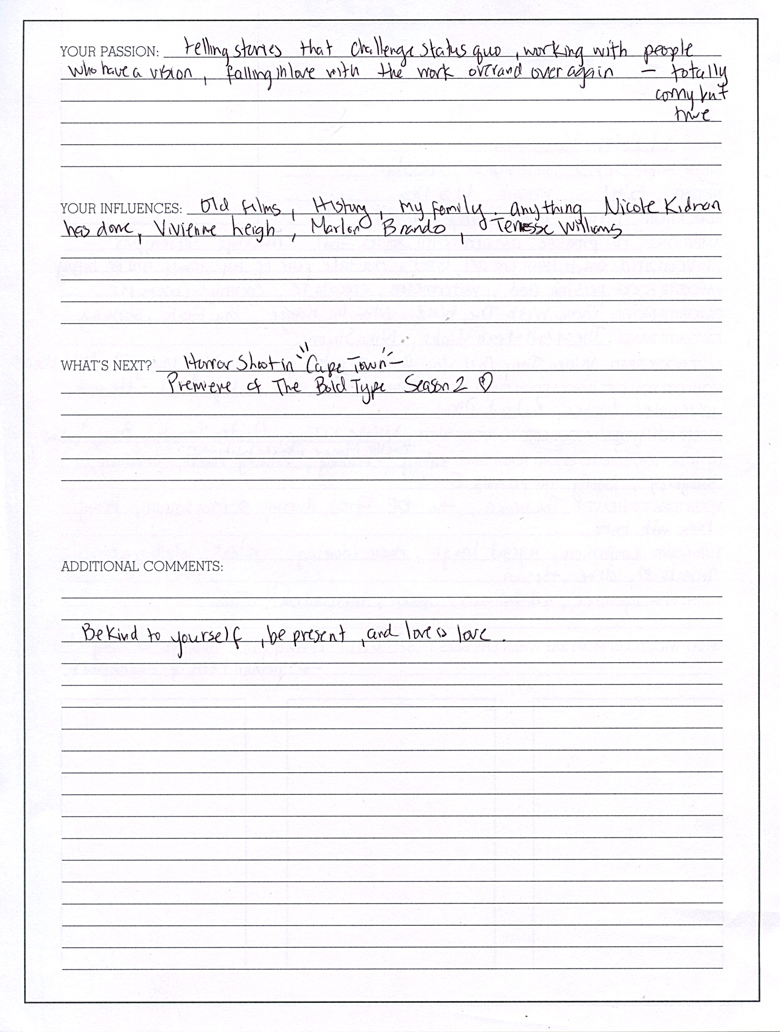 Where are you from?
I grew up in Vancouver, BC, in Canada.

Ambitions:
To produce and tell stories that challenge stereotypes. To be inspired and to learn and get better. To take care of my family and be happy.

What was your first break?
My first real break was Circumstance. I’d never auditioned for film or television before. I was in theater and an agent had seen me in a play. The first taping audition I had was for Circumstance, which flew me to  the other side of the world. I got to go to Sundance, which was pretty incredible.

What have you been in?
Circumstance, which premiered at Sundance. I have been some great indies. I’m currently in Altered Carbon on Netflix and on The Bold Type on Hulu and Freeform.

How do you feel about this career?
Oh God, I feel differently every day. I sometimes have to pinch and remind myself to enjoy the process because sometimes you get tired and a little grouchy about things, but it’s so fun. We’re so lucky we get to meet incredible people all the time and travel.

How did you decide to become an actor?
As soon as I knew that acting could be a profession, there really wasn’t another choice for me. I think I was 15 when I told my mom. Her worst nightmare.

How would you describe your specialty or type?
I play sad roles a lot, to be honest. I get to do a lot of really interesting political and culturally relevant roles and projects. I would say that’s my type at the moment.

“I feel so often we think about our disadvantages rather than advantages. I think that I’m empathetic and compassionate and curious.”
— Nikohl Boosheri

Who is your favorite actor you look up to?
My favorite actress is Nicole Kidman. Watching her in Moulin Rouge was definitely one of the reasons that I wanted to be an actress, other than Vivien Leigh as Scarlett O’Hara.

What would your ideal job be?
My idea of an ideal job changes all the time. Right now I would love to get paid to live in New York City, to be honest.

Do you consider yourself to be lucky?
Yes. I don’t know if I believe in luck, but I’ve been blessed.

What advantages do you have?
That’s interesting because so often we think about our disadvantages rather than advantages. I think I’m empathetic and compassionate and curious.

How do you feel about how interconnected the world is becoming?
It’s a really exciting time. I’m not that technologically inclined so sometimes it freaks me out, but at the same time I see young people, like the generation after me, and I’m so inspired by them all the time and the way that they’re using these tools that sometimes you’re afraid disconnects you, but they seem to be using it to connect with each other. I think that’s really cool and optimistic.

“I think we’re facing a lot of the same challenges that we have in the past. I think history always repeats itself.”
— Nikohl Boosheri

What does the future look like to you?
The future is bright.

How do you feel about having children?
Ask me in a few years. I don’t know yet. I can’t even get a dog.

What is your favorite way to communicate?
I think I’m best in person. Not a great texter. I’m not great on the phone either, to be honest.

When They Call You a Terrorist
Written by award winning author and journalist Patrisse Khan-Cullors, this memoir is an empowering account of survival, strength and resilience from the founder of the Black Lives Matter movement.

What is your favorite book, film and music right now?
My favorite music: I’m listening to a lot of Janelle Monáe. I’m obsessed with Janelle Monáe right now. My favorite book: I just finished When They Call You a Terrorist. I can’t think of the writer right now, but it was really, really incredible. It’s about the woman at the center of the Black Lives Matter movement. It’s just very relevant. Favorite movie? I just rewatched Moulin Rouge and it’s still one of my favorite movies.