“I think after this latest role I’m pretty unpredictable.
I’d like to continue to shock people and
do things they don’t think I would be able to do.”

Ross Lynch
Raised in Colorado, Ross Lynch is an LA-based actor who stars as the high-school aged Jeffrey Dahmer in the critically acclaimed film My Friend Dahmer (2017). Lynch is also known for his role in the Disney Channel series Austin & Ally (2011-16), the Teen Beach Movie (2013, 2015) series as the frontman of popular band R5. Rolling Stones named Lynch as one of the 25 Stars Under 25 this year.

R5
R5 is a pop rock band from Los Angeles, California, formed in 2009 by Ross Lynch, Riker Lunch, Rocky Lynch, Rydel Lynch and Ellington Ratliff. Their debut album, Louder (2013), peaked at #24 on Billboard’s charts, with their second album, Sometime Last Night (2015) peaking at #6 in the US. R5 released their latest album, New Addictions, this year and embarked on another multi-continental tour.

My Friend Dahmer
A 2017 film written and directed by Marc Meyers, My Friend Dahmer follows to-be serial killer Jeffrey Dahmer through his high school days, when he was a shy and awkward teen, before his notorious string of murders. The script is adapted from a 2012 graphic novel by cartoonist John “Derf” Backderf, who knew Dahmer growing up in Ohio. Starring Ross Lynch as a young Dahmer, the film also features Anne Heche (Donnie Brasco) and Vincent Kartheiser (Mad Men) and premiered to critical acclaim at this year’s Tribeca Film Festival.

Unlike most former Disney Channel stars, Ross Lynch has managed to reinvent his career in a single compelling film. As the star of Marc Meyer’s My Friend Dahmer, based on the graphic novel by John “Derf” Backderf, Lynch probes the nuanced psyche of teenager and eventual serial killer Jeffrey Dahmer. He shares about his family’s move to California, his education via world travel as the lead vocalist and guitarist of pop rock sensation R5, and his opinions on marriage and global warming. 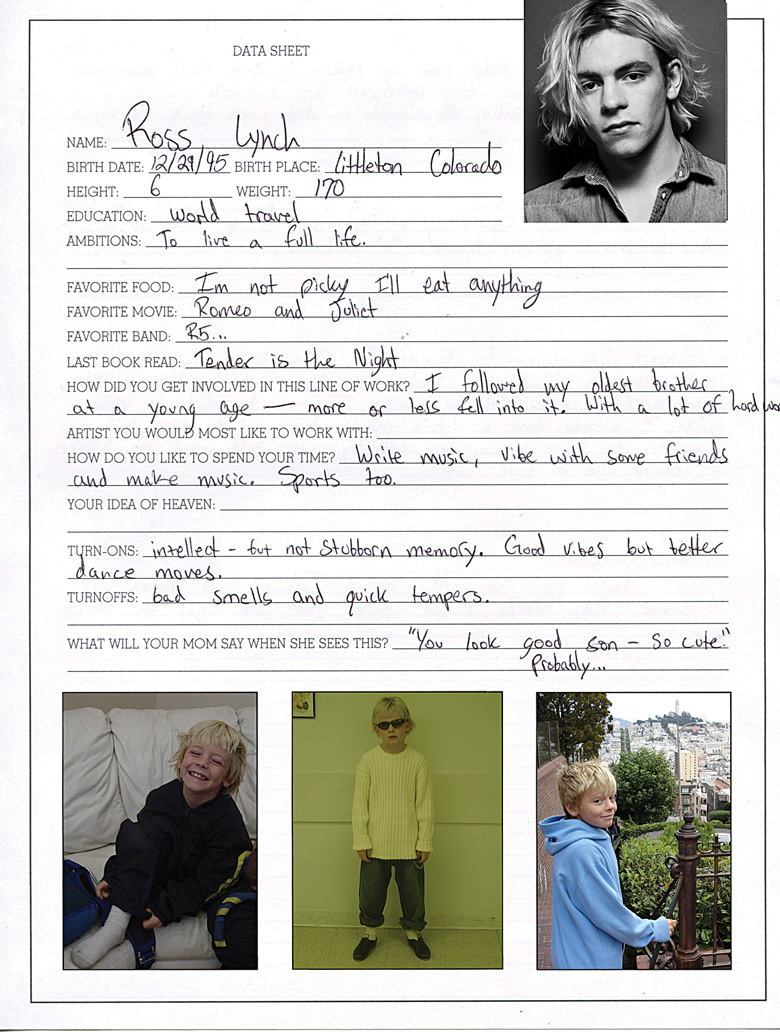 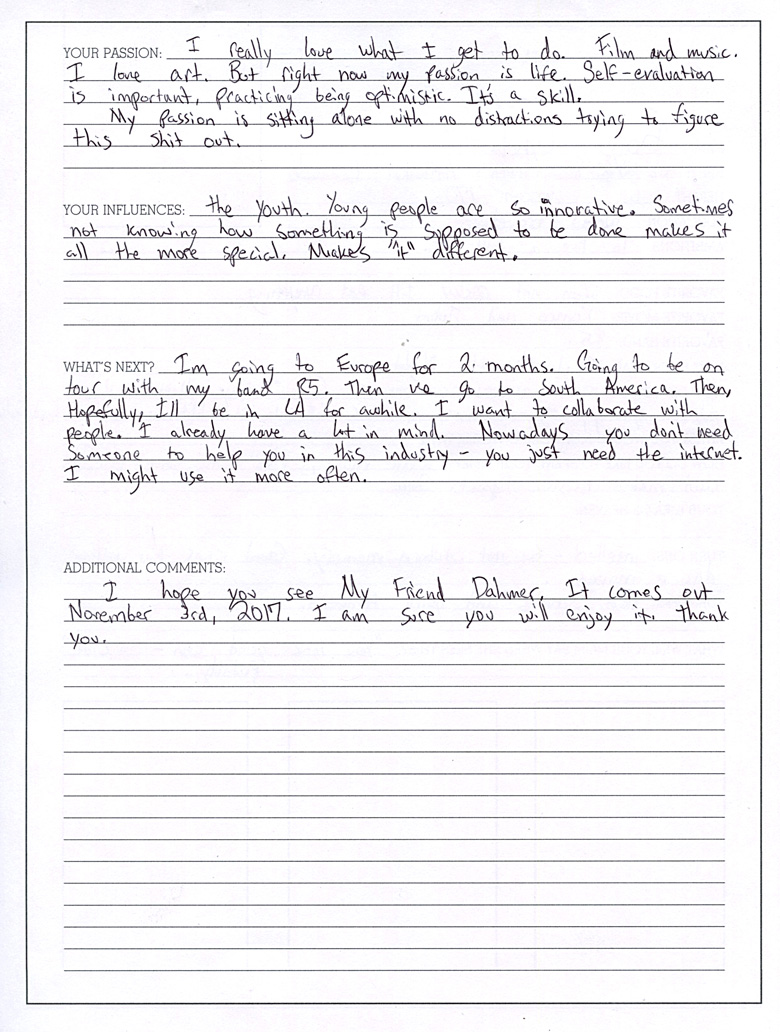 How do you like to spend your time?
Write music, vibe with some friends and make music. Sports too.

What was your first break?
My first break, interesting enough, was a fashion show. I was about 10 years old.

What have you been in?
I was on the Disney channel for a long time—that’s what people know me for. Either that or my band, R5. And recently I did a movie called My Friend Dahmer where I played Jeffrey Dahmer as a young man.

How do you feel about this career?
First off, I feel really fortunate. I’ve had a lot of really lucky scenarios happen, although I’ve also worked tremendously hard and give 110% on everything that I do.

“I never went through high school, so my outlook and perspective on things is a little bit different than your average person. Not in a better way, by any means. Just different.”
— Ross Lynch

Also, I feel like I have a very strange life and outlook on a lot of things because of the situations I’ve been in. For instance, I traveled the world when I was 16 in a band on tour. That’s a scenario that not a lot of people get to experience. Because of that and because of all the different cultures I’ve seen, I think about a lot of things differently. I never went through high school, so my outlook and perspective on things is a little bit different than your average person. Not in a better way, by any means. Just different. I’m having a really good time with what I do, and I want to continue to do it.

How did you decide to become an actor?
It kind of chose me. My older brother wanted to move out to LA when he turned 18. We moved as a family before he turned 18 because I was booking jobs from Colorado that were in LA. It worked because we were all working. We moved first to a motel for a few months, then into a two-bedroom apartment, all seven of us. So we were pretty comfy at first.

I was originally a dancer, and then music came full force. My whole family started playing music. But the goal for me was always to become an actor. The music just came out of nowhere.

How would you describe your specialty or type?
I think after this latest role I’m pretty unpredictable. I’d like to continue to shock people and do things they don’t think I would be able to do. Obviously, people like to put others in boxes and think that they’re good at one thing and that they are a certain way. For instance, in my interviews I’m very happy, very bright. That’s my normal way of being. But I also have, as everyone does, dark sides and things you don’t always show people. It’s cool to showcase that personality has a lot of different sides and that people in general have a lot of depth. I’d want to showcase that a little bit more.

Who is your favorite actor you look up to?
Tom Hardy. It’s kind of a cliché answer, but I really like that guy. Michael Fassbender is amazing. I like Mads Mikkelsen. Peter Dinklage. I’ve been watching Game of Thrones recently, and he’s pretty rad. Kit Harrington also. Actually, that whole cast. Emilia Clarke. They’re all unbelievable.

And I really like Jamie Foxx. I like that he’s done a lot of different kinds of roles. That’s appealing to me.

“I always had in my head that I wanted to do a small indie film afterwards. I never really knew what kind or how it was going to happen, but I was just telling myself that.”
— Ross Lynch

What would your ideal job be?
I’m doing it, honestly. When I was on Disney Channel for a long time, I always had in my head that I wanted to do a small indie film afterwards. I never really knew what kind or how it was going to happen, but I was just telling myself that. Then one day, the script for My Friend Dahmer made its way to my inbox, and it was almost like it was meant to happen.

Do you consider yourself lucky?
I think luck is when preparation meets opportunity. So in that sense, I think so.

What advantages do you have?
I have a great family. They’ve been with me from day one until now, and that’s a massive advantage. And I’ve been doing this for a long time. I’m only 21, and I booked my first job when I was nine years old. So it’s been a long time coming.

Would you rather have a car or a diploma?
Probably a car.

We’ll see. Personally, I think the next generation is going to not be on social media at all. I think they’re going to be against it. But I don’t know. I need to put more thought into that.

How do you feel about how interconnected the world is becoming?
It’s really cool. For instance, I could talk to people from Russia if I wanted to. I think culture and belief systems around the world are all starting to come together. We’re all starting to believe in the same things. So from that sense it’s cool. But again, the instant gratification part is not as cool. Maybe there’s a happy medium. Social media’s weird.

What does the future look like to you?
Well, there’s a lot of bad things going on right now, and there’s a lot of bad things people can look at, and they do. However, there’s never been more people housed and fed than today. So regardless of some of our political situations and the bad things happening in the world, there’s also a lot of great things happening. Hopefully there’s going to be a positive future. I’m an optimist, or I try to be. I practice being an optimist.

“All the other human-related things, when compared to global warming—if we don’t have a world to live on, where are we going to go? Elon Musk is trying to go to Mars but that’s not certain.”
— Ross Lynch

What challenges do you feel the world is facing today?
The biggest one is global warming, for obvious reasons. All the other human-related things, when compared to global warming—if we don’t have a world to live on, where are we going to go? Elon Musk is trying to go to Mars but that’s not certain. I think we need to take care of where we live, and then we can take care of all the BS going on.

What’s your favorite way to communicate?
Face to face. I like to communicate. I don’t like small talk. It’s cool to find out where people are from and stuff, but in the end, I don’t think really anybody cares unless they have a personal relationship with that place. I like to get down to the meaningful things.

What’s your favorite book, film, and music right now?
The last book I read was Tender is the Night. I don’t really like the way it ended, but it was good. It’s F. Scott Fitzgerald, so how bad could it be?

The series I’m watching is Game of Thrones. I think everybody in the world is watching that, and rightfully so. It’s probably one of the best TV shows I’ve ever seen.

The latest film I saw was Baby Driver, and I was listening to Tyler the Creator’s new record, Flower Boy, on the way here. He’s got some jams.