“When I was younger, I was definitely cool, but I was never the

cool guy in the situation. The bad boys were always

the ones who people thought were cool and wanted to hang with.

Shameik Moore
Born and raised in Atlanta, Shameik Moore starred as Malcolm in the 2015 Sundance favorite Dope, and recorded several songs for the film’s soundtrack with Pharrell. He got his start acting alongside Nick Cannon on Cartoon Network’s sketch comedy series Incredible Crew, and with his first feature film role in 2012’s Joyful Noise. Musically, Shameik released his debut mixtape I Am Da Beat in 2012 and is set to release his album What I Want in 2015.

The Atlanta-born Shameik Moore landed his first lead role in the Sundance hit Dope. Set in Inglewood, California and executive produced by Puff Daddy and Pharrell Williams, the comedy-drama sees Moore as Malcolm, an ambitious and nerdy kid obsessed with 90s hip hop, who gets accidentally embroiled in a drug deal. Moore’s performance got him cast in a central role in Baz Luhrmann’s television show about teens living in the Bronx in the ’70s, “The Get Down,” premiering on Netflix in 2016.

Holly Grigg-Spall: Playing the character of Malcolm in Dope is your first major role in a feature film. How did you prepare for the audition?

Shameik Moore: I sent in a self-tape from Atlanta. My agent and manager had sent me two auditions—one for the Tupac biopic and one for Dope. I sent in the one for Tupac, but I didn’t send in the one for Dope, and they called me and told me I had to. So I was like, cool, let’s do this. I did another self-tape. The guy who recorded me thought I did a really good job and said, “This one might be the one, man!” Two days later, on a Friday, they called and said they needed me in LA by Tuesday. I called my mom and was like, “Yo, we need to go to LA. We need to be in LA!” We ended up shooting two weeks later. It’s just crazy because I wasn’t going to send in the tape, but they just knew it. They were looking for me. They were looking for Malcolm, for real. And they weren’t finding what they were looking for. It’s meant to be.

HGS: Do you feel you have anything in common with Malcolm?

SM: I think the way he doesn’t feel he fits in with his environment. I could relate to that. I’m a dancer. When I was younger, I would be around people into other things, getting into trouble. They weren’t in the same frame of mind I was in. I would always feel… not that I wasn’t cool because I was definitely cool, everybody liked me, but I was never the cool guy in the situation. The bad boys were always the ones who people thought were really cool and people wanted to hang with. Shameik was always on his own. I got along with everybody, so I didn’t have any problems. Malcolm has enemies. A lot of people want to hurt Malcolm. He gets caught up in situations where he could be killed. He’s into 90s hip hop, positivity, bettering himself and his life, and the people around him are into gang-banging and drugs and all that. So I can relate in that sense.

“I feel that Dope turned out great
because while we were on set,
we all saw greatness for this project.
It came down to how bad I wanted it.”
— Shameik Moore

HGS: The film centers on a friendship between you and two other teens. So who are your best friends in real life?

SM: One of my best female friends, Kiersey Clemons, plays Diggy, my friend in the movie. I have so many male friends and I see them as my brothers. I just think of everyone back home and the people in We Entertain who I vibe with. My closest male friend though, I think, is Kofi Siriboe. He’s an actor too, and he’s about to be big. He’s got some movies coming out. We’re in the same mind-frame.

HGS: Most people haven’t had the chance to see Dope yet, but as you know there’s been a lot of hype around the movie and you in particular. Everyone must be telling you why they think that is, but I want to know—from your perspective, why do you think that is?

SM: I feel that Dope turned out great because while we were on set, we all had positive energy and passion. We all saw greatness for this project. It came down to how badly I wanted it. In my world—in Meak’s World—it’s about what I say is going to happen. I’m into what I can do and not what I can’t do. I’ve been keeping a journal and reading books like The Alchemist. I wanted Dope to be a certain way, and it happened that way because we didn’t really give it a choice. That is what’s really the cause of this success so far. The movie hasn’t even come out, though. The trailer hasn’t even come out, so I mean success with Sundance.

HGS: When people do see the movie, what would you like them to take away from it?

SM: I really feel like everybody will get a different perspective on the black community. It gives you a whole new pair of glasses to look through. They’ll leave with a positive frame of mind and learn something new. Everyone will be able to relate to this movie—it’s one of those movies you can watch forever.

HGS: Did you get to see any movies at Sundance? What other films did you like?

SM: I didn’t get to see any movies at Sundance! But I like all movies in general. My dad watches a lot of cowboy movies, so I watch them with him. I like action movies like Mr. and Mrs. Smith, Wanted, the 007 series, the Bourne movies, Shaft. I can watch The Fast and the Furious over and over.

HGS: If you could play any role in a movie that you love, what would it be?

HGS: What kind of projects are you looking for next?

SM: I definitely want to do an action movie. We have a lot of opportunities on the table right now. In the next few weeks, we will have news of a new project out there online.

HGS: You have been doing a lot of interviews lately. I’m wondering what question have you been asked by an interviewer really stands out as memorable for you?

SM: Most people just want to know about the movie, so it’s been pretty consistent. I feel like that question right there that you’re asking me is the most stand out question so far.

HGS: Which actor’s career do you really admire?

SM: I really like Eddie Murphy, especially at the beginning of his career. The roles he was doing and how he was killing them, for sure. He gave them that chocolate. That specific… mmmm… That’s what I’m giving to the crowd—that new. That 2015. Just… chocolate. I like Will Smith and what’s he doing with his career too.

HGS: Do you watch a lot of TV shows? Would you consider doing a show next?

SM: I’m into a few shows—The Flash, Blacklist, Revolution, a lot of CW shows and The Arrow as well. I just finished Sons of Anarchy and Nikita. I think I’ll be doing a show, for sure. I’d definitely want it to be like a long movie, like Breaking Bad. It’d have to be an epic, cinematic show. I wouldn’t want people to watch and to think I’m a TV actor only. They’d have to still see me as a movie star.

HGS: For our photo shoot, you styled yourself. What inspired what you decided to wear?

SM: I go with the flow. I have a great styling team I collaborate with. I show them pictures I like. I’ll even take pictures of people wearing something I think is fly. I go back through history to other eras, other actors. I see what they did back in the 1950s—older generations of entertainers—and make something new based off of that. It also comes from the spirit – whatever I feel like putting on today, whatever color.

HGS: You are also a musician and rapper and you make your own music videos…

SM: I’m making movies now. All the people I’m meeting right now, they’re teaching me. I’m learning the whole concept of perspective. I’m meeting with directors, learning from their dialogue and seeing the kind of things they’re seeing. Working with Rick [Famuyiwa] on Dope—the conversations we had, the editing, the things he was telling me, what he wanted to capture—I’m able to take that and apply that to my whole situation. The visuals I’m about to put out are going to be on a whole other cinematic level… movies! And there’s music. It’s going to be music movies! My new project is “30058” (the zip code where I grew up in Atlanta), and it comes out on May 4, my birthday.

HGS: Do you live in LA full time now? How does it compare to home?

SM: Yep, I’m in LA now. Nothing compares to home, but it’s great because of my friends and the people I’m surrounded with. I’m surrounded by love and positivity, so I’m enjoying myself. Every day, I’m looking forward to the next day and, during the day, what’s coming next. There’s always something new—another interview, another photo shoot, another person I’m meeting, another meal, another laugh, another smile. There’s always something positive in the day.

I love LA. It is exactly what I thought it would be when I was growing up and wanting to come to here —where I wanted to stay, the kind of people I wanted to be around. A lot of people say LA is so different for them, and it’s not the experience people think it would be. But for me, it’s what I make it. I’m focused on working and being in LA to better myself and my career. I’m here to move forward in life. I’m not here to chill and go to parties and stuff. In my free time, I’m in the gym, playing basketball, watching movies, watching TV shows. I’m smiling and having positive dialogue with other positive people and I’m definitely enjoying myself. 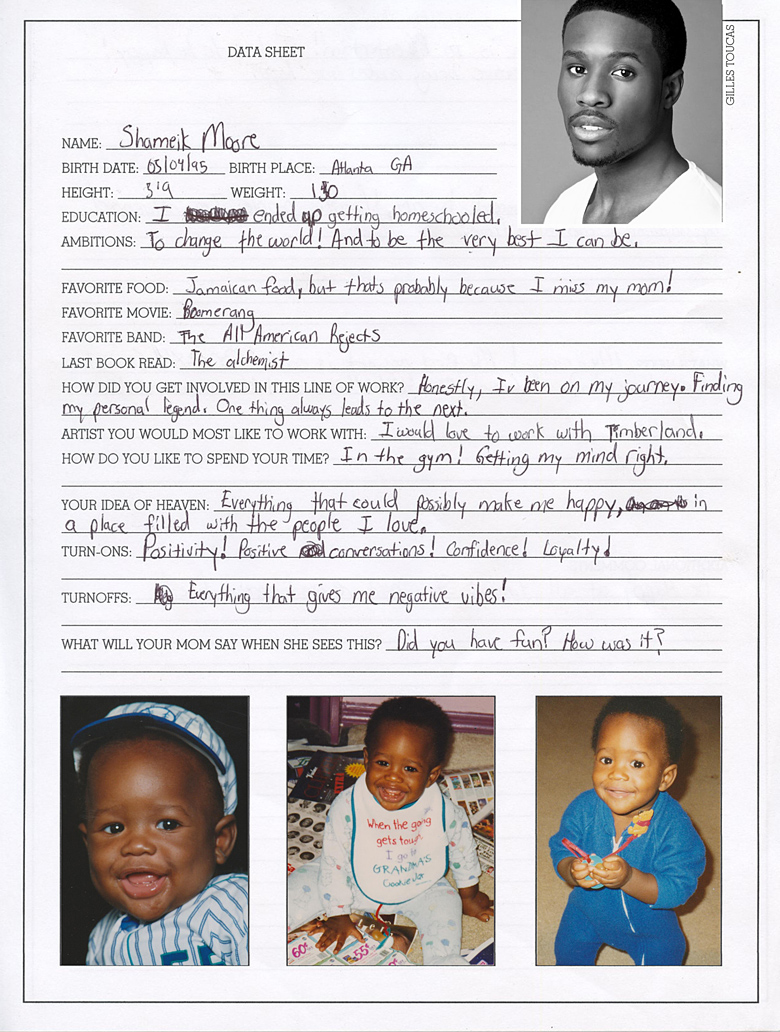 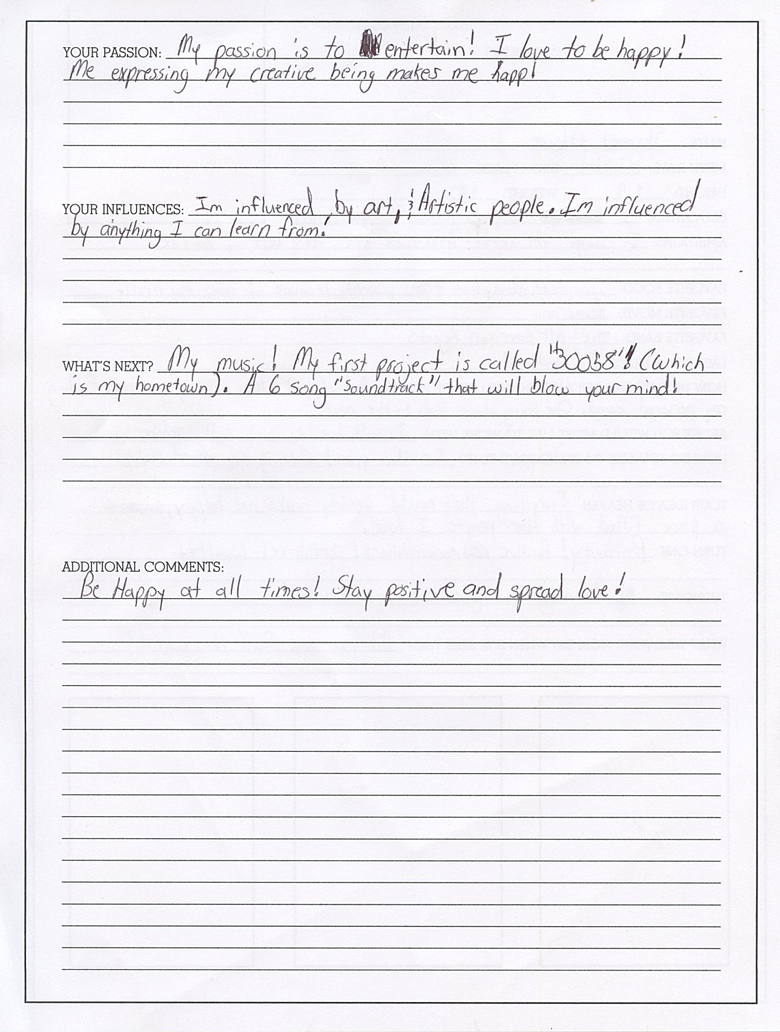