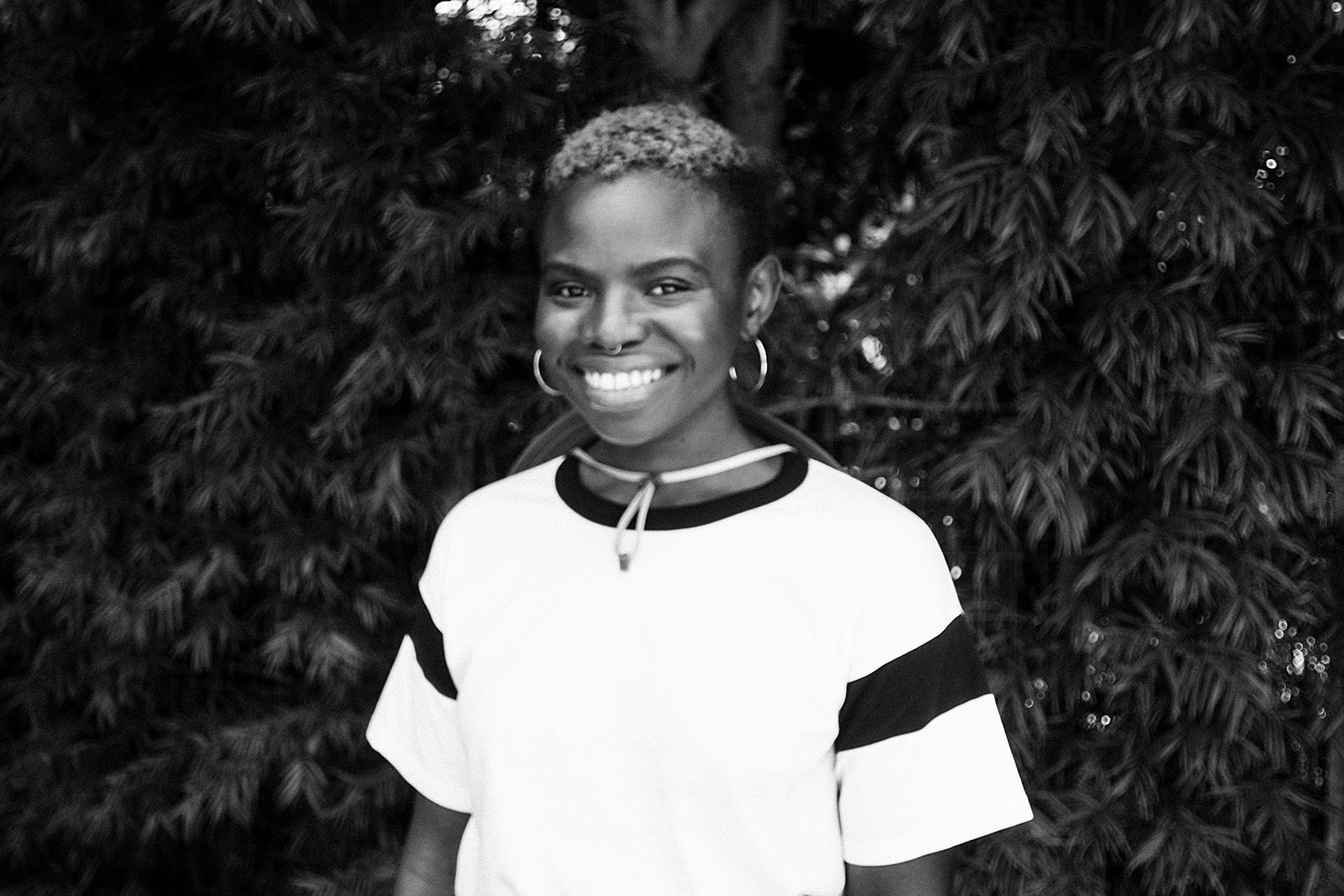 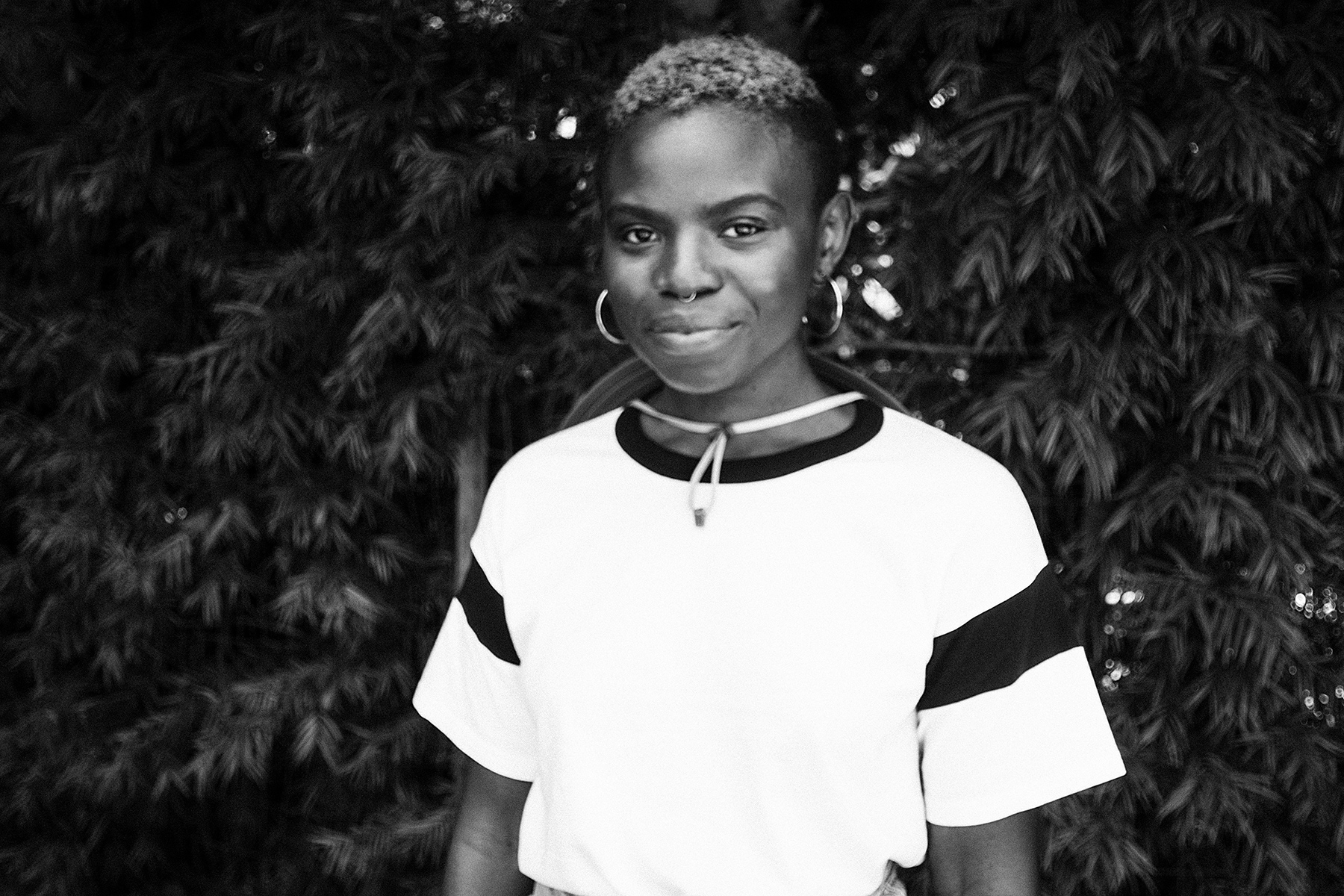 “I had a friend in engineering school who was
in an emo band. I remember seeing
him play and thinking, ‘Oh I could do that.’”
— Laetitia Tamko

Vagabon
Laetitia Tamko is a Cameroon-born musician and producer, recording since 2014 as Vagabon. Currently based in New York City, she released her debut LP, Infinite Worlds, through Father/Daughter Records in 2017.

Laetitia Tamko, the multi-instrumentalist and producer known as Vagabon, didn’t plan for a career in music. She had graduated from college with an engineering degree when she uploaded her first EP, Persian Garden, to Bandcamp in 2014. The lo-fi collection of demos and her burgeoning presence within New York’s DIY rock scene generated buzz, and she has since released her debut LP, Infinite Worlds (2017). The LP builds upon her stripped down demos— incorporating synths, keyboard, guitars and drums while addressing themes of location and personal growth. She spoke with us about the story behind her pseudonym, exposure to different cultures, and her shift from engineering to music.

When did you start making music?
I started making music in 2014, when I started to write songs. Then I comprised them into an EP of demos and put them up on Bandcamp.

Ali Farka Touré
Ali Farka Touré was a Malian singer and multi-instrumentalist, and one of Africa’s most highly regarded musicians. His music combines traditional Malian music and North American blues. Touré was ranked number 76 on Rolling Stone‘s list of “The 100 Greatest Guitarists of All Time.”

Who did you listen to growing up?
I listened to a lot of West African music. I’m West African so a lot of the music that I grew up on was Ali Farka Touré. He’s from Mali. There are a lot of musicians from Cameroon, like Manu Dibango, that I listen to and then I started listening to more contemporary stuff when I moved to the US, mostly Mariah Carey, Brandy, and Whitney Houston’s greatest hits.

How did you decide that this is what you were going to do?
I went to engineering school, and while I was there I had a lot time to think about what I wanted to do for the rest of my life. While I was good at engineering, I knew that was not how I wanted to spend all of my days. I have always been interested in music, but it was never part of my cultural upbringing or seen as legitimate, so I went the academic route. Finally, I decided to take my need to make music to a level that seemed pretty sustainable.

How did you get started?
I had a friend in engineering school who was a musician and he was in an emo band. I remember seeing him play and thinking, “Oh I could do that.” And then I started doing it.

“I still do calculus every morning and I like long-distance running. These are the things that give me a full life.”
—Laetitia Tamko

When do you feel you got your first break?
I don’t think it’s come yet. Fortunately, my record Infinite Worlds did better in terms of landing in the ears of people than I would have ever imagined, but I think there’s a lot more that I want to do.

What life events have impacted you and your music the most?
I would say constantly moving or living in different places, being exposed to different cultures and socioeconomic backgrounds. A lot of it centers around home and what that means as a physical and emotional place.

“A vagabond is something that my mom has called me, for constantly trying to move. Never staying still was kind of my thing as a child.”
—Laetitia Tamko

What’s the story behind the name Vagabon?
I knew that I didn’t want to make my music under Laetitia, which is my name, because it’s often mispronounced and it irks me. I didn’t want to keep correcting people. A vagabond is something that my mom has called me, for constantly trying to move and being curious about different things and places. Never staying still was kind of my thing as a child.

What are some things that are important to you that you like to address through your music?
It’s important for me to express that these songs are things I’ve used to heal myself. I hope that by sharing them, they heal other people.

“I had a friend in engineering school who was in an emo band. I remember seeing him play and thinking, ‘Oh I could do that.’”
—Laetitia Tamko

Hailu Mergia
Hailu Mergia is an Ethiopian accordionist, keyboardist, and arranger. His band, the Walias Band, was the first modern Ethiopian musical group to travel to the US and perform in the 1970s.

What are your interests and passions outside of music?
Despite not being an engineer by trade, I still do calculus every morning and it’s something I really feel good about. I also like long-distance running. Those are the things that give me a full life.

What are your favorite books, film and music right now?
My favorite music right now is a band from Hamburg, Germany, that opened for me on my last European tour. They’re named Monako, and they have an incredible EP that is coming out soon—it’s some of the best music I’ve heard in the last five years or so. I’ve been reading this book by Haruki Murakami called What I Talk About When I Talk About Running. It’s a memoir from a novelist who is also a long-distance runner. I’ve been really enjoying how he compares the meditative state of long-distance running to art. It’s been helpful for me in making my next record, which I’m working on right now. I don’t really watch movies. Pretty Woman is my favorite movie ever.